Hidden item puzzle games. They have never been on my radar and in my honest opinion, I firmly believe that these should be firmly in the domain of smartphones and tablets and that they don’t really have a place on home consoles. I’d maybe even stretch to a PC, but not Xbox or Playstation machines.


I know what you’re thinking. You’ve seen me write that paragraph before. And you’d be absolutely spot on. The words you see above are those of the review for Queens Quest 2 and whatever the sub-title was, which I can’t remember. The full title for this one is “The End of Dawn” but to be perfectly honest, it should really be titled “The End of originality.” as there is very little to distinguish this one to the predecessor. I mean, I used the same opening paragraph simply because it is relevant to both games. If I could have gotten away with it, I’d have used the same review and just shoved a 3 on the title, but I’m not like that. Mind you, you can now pretty much see where this is going...


Gameplay 5/10
How about we go down the magically gifted alchemist left at the door of a magic school as a baby story? Sure, why not? That is literally where this is going. You play Elisa, who is taken to a school of alchemy when the would be saviour is slain in trying to save her, but not before the headmaster steps in and takes her in.


After growing up a bit, she is sent on a “magical quest” to retrieve a “special artifact” (honestly, you could change the things in the quotation marks and reach the same conclusion) and you must do this over 70 puzzles and 50 hand drawn, but static, locations. The pictures look amazing, but bear in mind they don’t really move.


What you end up with is pretty much more of the same. It really is a different packet holding the same contents. Hidden puzzle stuff can’t really change, other than the items you’re looking for. The other puzzles are a little more interesting, but not enough to make you sit up and think that everything is going in the right direction. 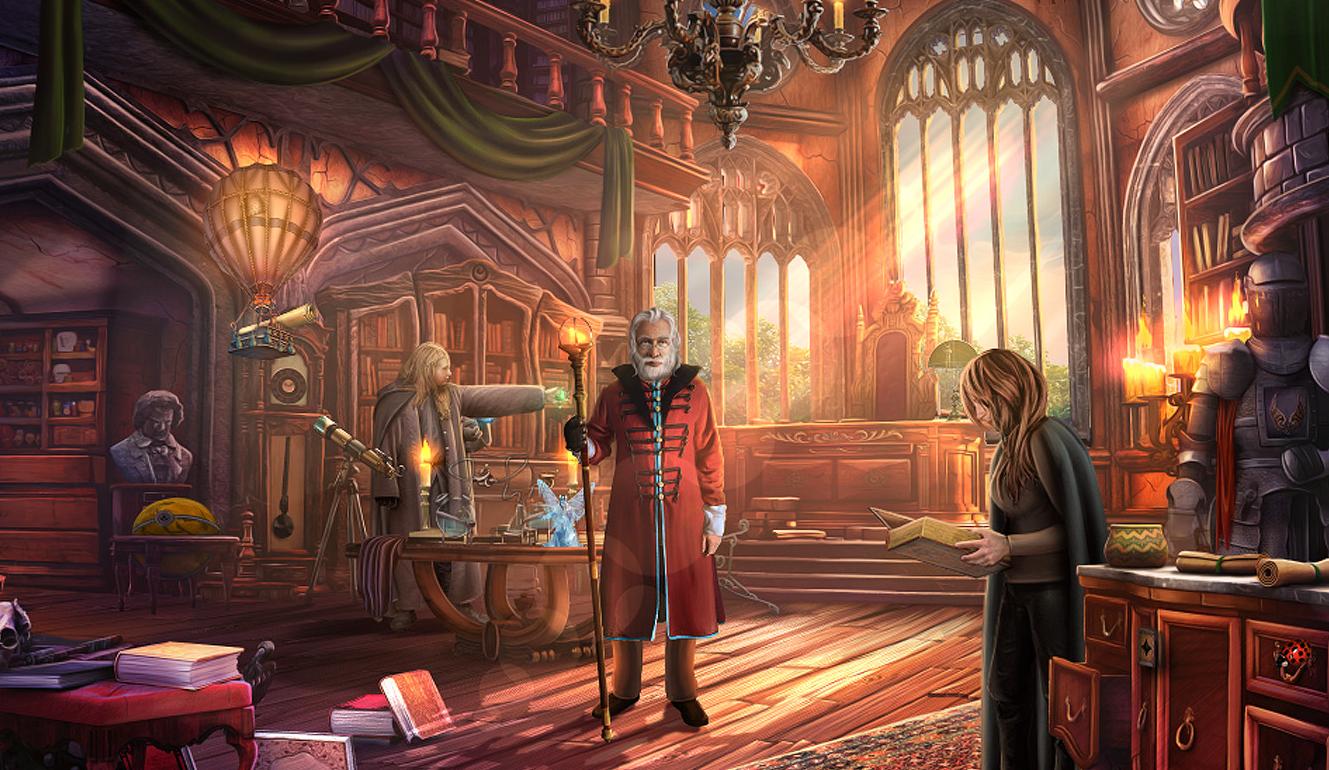 Who put that creepy looking statue in the back, and more importantly does it hold any clues, as I do not want to go near it!

Graphics - 5/10
“This one really does divide me right down the middle. I do think the graphics LOOK nice, but the actual movement through a rather haphazard game engine, really doesn’t help matters.”


The more things change, the more they stay the same. The intro to Queens Quest 3 instantly made me go back to this again, and it is literally because NOTHING HAS CHANGED. There’s still loads of colour, but good grief, get some animation into all of this instead of making it look like a stop-motion film. There’s really no excuse for this anymore.


Clearly the game engine is the same as in the second title (and undoubtedly the fourth, let’s be honest) I won’t re-hash quotes from the second review, but I’m doing it to prove a point here. There is no difference and this makes you feel like that when I just use lines from the last time, but it actually makes a better example of what I’m on about. You can layer whatever you want over the top of something, but if the key components are the same, does it matter?


Sound - 4/10
Please, for the love of all things sacred, change the record. It is just more of that droning monotony. The vocal work is still borderline criminal, the music is mainly filler and no killer, much like those compilation CDs you get in the shops that say they have the greatest songs of a certain decade and then disappoint when you buy them. It never sets the world on fire, but the fire in your eyes will more than make up for it. It is just so incredibly dull, but again, like I’ve said many times before, it fits the game style, so it is hard to be totally harsh. Just a little bit though.


Difficulty - 4/10
It gets an extra point this time because some of the puzzles are a touch on the different side. Not so much extremely difficult, more a break from the tedious norm. The actual difficulty really hasn’t deviated, but in these games, they never do. I think the problem I have is trying to get myself to go through ANOTHER of these in such a small space of time. I’d say it is more difficult to get through more hidden puzzle games when there is such a small turn around. They could learn by expanding the time between release, rather than having it a few months down the line. Now this is a guy who reeks bad dude all over. amiright?

Achievements – 5/10
Much like the second one, you get rewarded after getting through each main section, with a few extras thrown in to cover those locations and puzzles a bit more in-depth, although I do find it funny that some of the achievements are hidden. Give it a minute, it’ll sink in.


Summary
What I can say about Queens Quest 3: The New Dawn? Well, it is much like Queens Quest 2: Stories of Forgotten Past. The voice acting is still cringe-worthy, the graphics are still on the “could do better” side and the audio just numbs the boredom which will consume you if you’re not a big fan of hidden puzzle games.


You would think they would at least try and bring some completely new things to the table, and to a small point, they kind of do in the puzzles that don’t involve looking for things.


These games aren’t the worst I’ve ever played, but much like the second one, you have to get an enjoyment out of games like this, because if you don’t then there really isn’t ANY point in going for these. But then, it isn’t like I’ve said this before or anything, now is it...?


“If you truly cannot do without games like this then you will be in your element. I can take and leave them though, and for me, some things should just stay hidden...”

I’m not hiding the irony that well, am I?