Now, I have a very soft spot for sh’mups. Always have. R-Type and Gradius was what I grew up with, and if it wasn’t for the fact that it is just gathering dust, I’d be whacking on the old PS2 and getting the variants of those two stalwarts and enjoying it for all its worth.

There will no doubt be those who are under the age of 20 looking at this and thinking “What is the point in this kind of game?” I can’t get headshots or build a pallet in front of an enemy to get an advantage. Oh, how the kids of today have not experienced the joys of guiding a spaceship across the galaxy, collecting power-ups and doing all this with the power of an eight axis joystick and a few bits of currency thrown into a coin-op.

I’ve been wanting something like this for the current gen for quite some time, but nothing has ever been close to delivering that all round brilliant retro vibe that you used to get from them. Having played Black Paradox though, there are signs the gap is shrinking.

This is what you want. Pixel art styled graphics featuring you in a souped-up autombile that can fly though space (although it does look suspiciously like a DeLorean from Back to the Future) and blow anything up that’s in-front of it. You ARE Black paradox and you are placed up against 7 fiendish lieutenants. These guys and you are the only things that are predictable, as this is where the trump card of the game comes in to play.

You see, the game is completely randomly generated. The enemies come in through different waves, in differently created environments, which makes it nigh on impossible to be able to read patterns and predict when things are going to happen from level to level. The main bosses and the 7 minions that go alongside are the only baddies that are consistent. Everything else is not.

This makes for a refreshing change and a massive challenge to those who are looking for something to make their bullet hell experience even MORE difficult because things become more difficult to read. This is a great idea for most, but there will no doubt be those traditionalists that like to study the way things happen, which just can’t be done here. 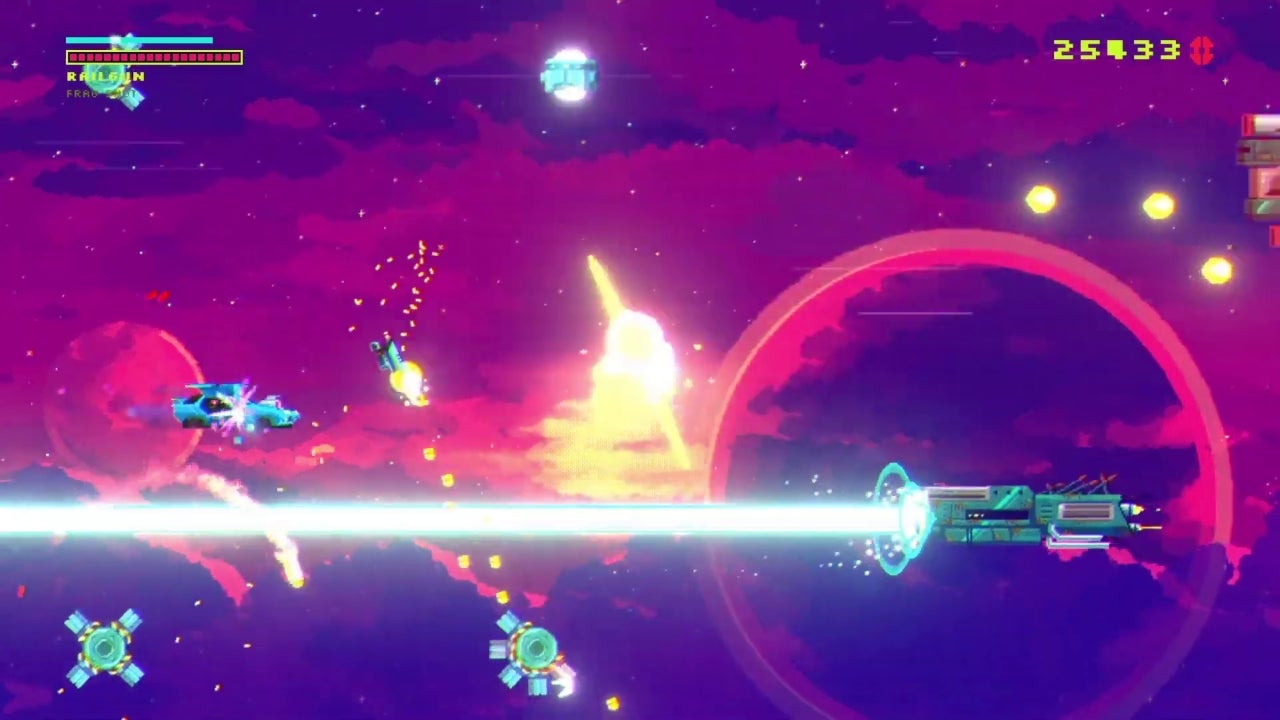 Pixel art warms my cockles, and Black Paradox is no exception. It really does look wonderful. There is so much vibrancy in the colours that it takes me back to Geometry Wars 2, Bizarre Creations’ epic arcade twin-stick beauty. It is a feast on the eyes and it really does scream from the telly with so much spread across the spectrum. Even the bullets have a neon tinge to them, but that makes them stand out better, which for someone with middle-aged eyes like myself, is a real bonus.

It is synth-wave, which makes it incredibly 80’s. It reminds me a little bit of the music from that rather iffy Ubisoft crossover with Trials and the Curse of the Blood Dragon. The tunes were the only real good thing to come from that. That doesn’t affect Black Paradox, as the audio matches the visuals well and blends everything together just nicely. The blasts pack a punch and nothing is too overpowering. I do like the balance this game has in not just the ear blasting department, but in all the blasting bits put together.

This one is kind of a hard one to gauge. I do like the fact it is hard, but it can sometimes be too difficult. The thing is though, I do kind of put this down to the fact I’m an older gamer. I’m sure there are people half my age who could do this game completely, whilst blindfolded, and fixing a Rubix Cube with the other hand. I personally found it super difficult, but then I also am a huge fan of the Souls series, so I do like things to be extremely hard, so that I feel like I have to better myself to get anywhere in the game.

Black Paradox has that random level generation system packed into it, so you’re never going to be able to study it. The odd enemy pattern may be noticeable, but you’ll never know WHEN it is going to appear. It constantly keeps you second guessing, which can sometimes play with your mind and cloud your judgement. If you’re a hardcore gamer, you’ll be fine. If you DON’T have the reactions of a ninja though, just be careful. 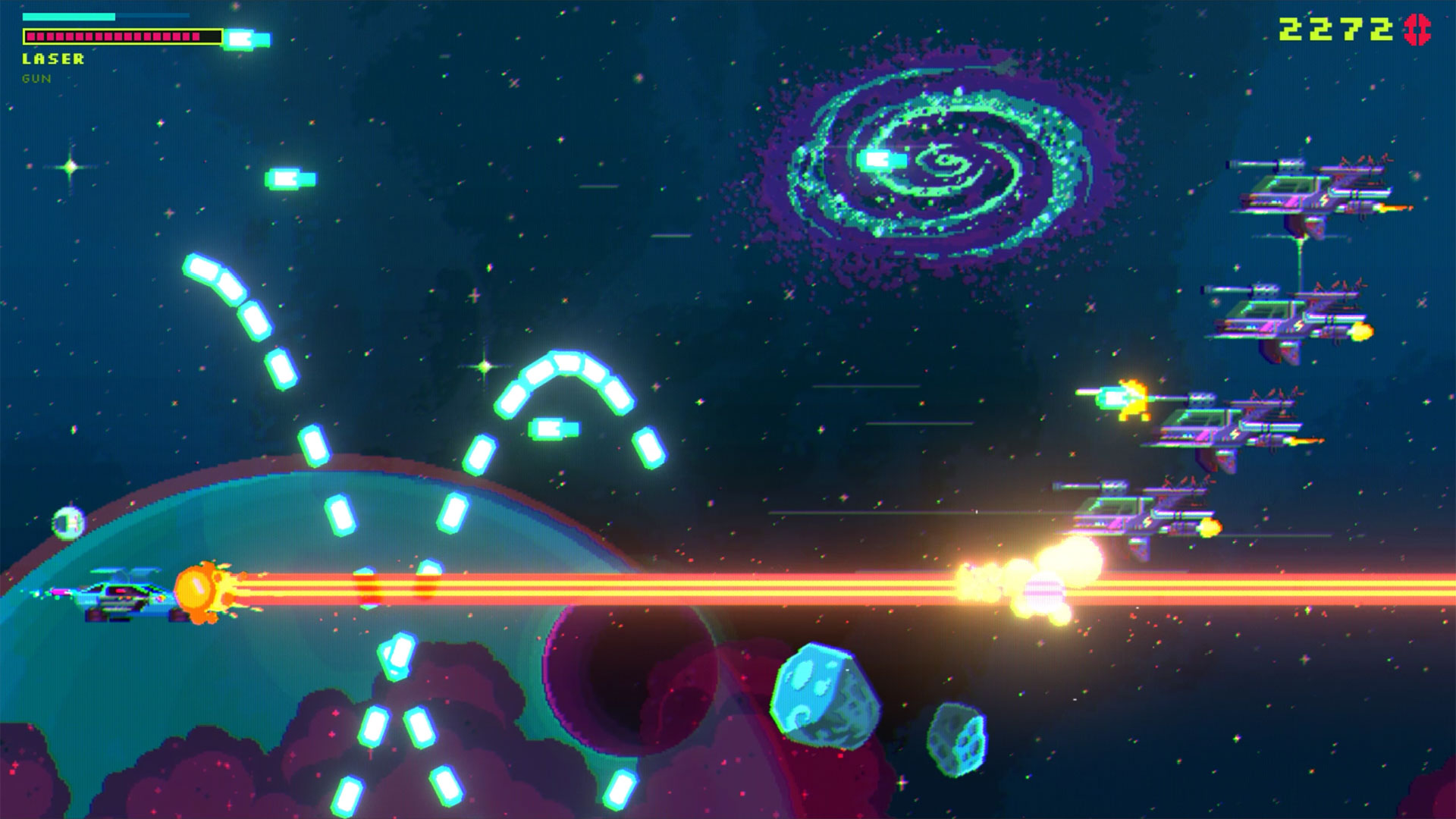 I am not sure who looks to be in more of a world of trouble in this picture?

It does what you want it to. You finish a level, you’ll get rewarded. You shoot certain amounts of enemies, you can have a gamerscore treat. You know how this all works by now, I’d imagine.

I was not expecting much with Black Paradox when it graced my hard drive. I have seen these shooters so many times before and they usually ALWAYS disappoint. This game does not do that though, and I’m just glad that I can FINALLY have a game on the old machine that I can truly enjoy.

Black Paradox IS that blast from the past that I’ve been waiting for. I do have my heart det in the old days, so maybe I’m just a little bit biased in that way, but frankly, I don’t care.

It relights my childhood memories and lets me dream of the veterans of the genre making a comeback. Stranger things have happened and I can now at least sit here, knowing that if they don’t bother (although R-Type Final 2 has been mentioned) we can find those that will step up to the plate and make us, thirty and forty somethings smile a bit more.

I recommend this to those who want to revisit their youth and save the coins for their pocket. I mean, who needs real money anymore, right?