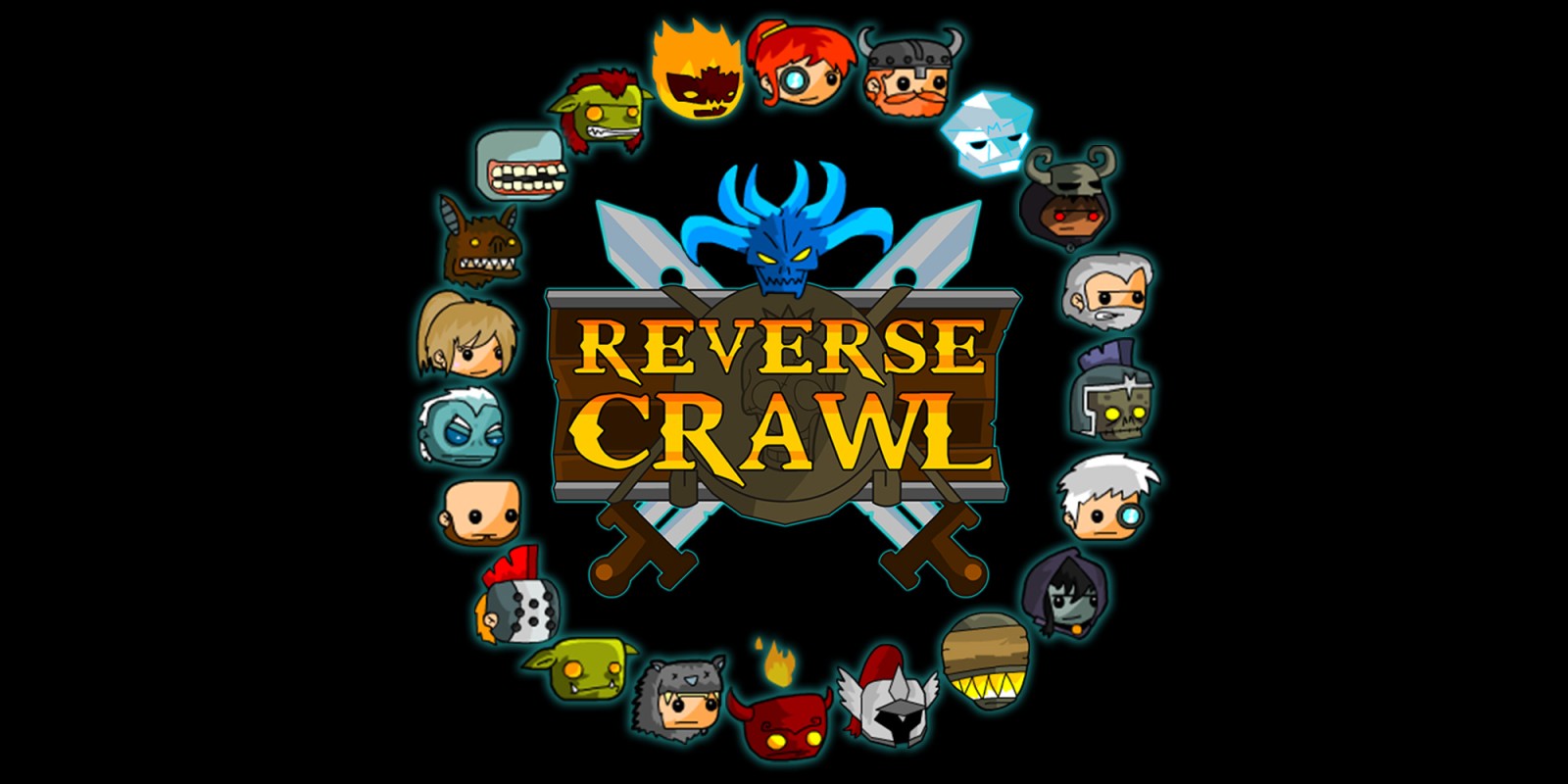 Strategy based RPG’s have never been games that have floated my boat, I won’t lie. They would bore me, regardless of whatever the story was and, in my lifetime, I’ve seen some crazy ideas. R-Type had a Tactics game and that was just the final straw, what with the PSP and XBox 360 almost being inundated with them.

That doesn’t mean that a leopard can’t change its spots. The idea behind Reverse Crawl is a good one and it kind of gives you a different take on what is a fairly predictable genre. The only thing left to decide is whether or not it actually does breathe new life into a game type that seems to have been stagnant on Xbox One, with only, for me, the brilliant Banner Saga series flying the flag.

The King is dead, long lie the... Oh, hold on. Yes indeed, you happen to have snuffed it, but never fear, you’ve got a daughter that dabbles in the dark arts and manages to bring you back to life, but you’re just a little more corpse-like than you’d be thankful for.

This is the element that changes the normal scenario, as you are bringing an undead army to your side to beat up those that are good old-fashioned soldiers who work for the Red Queen, with your story involving getting retribution for what has happened. It’s a very refreshing take as well because it gives you a different story and that is a lovely thing indeed, as you do get sick and tired of the same old that most tales seem to go down.

In terms of how things play, that isn’t so different. You still have your hexagonal grid, hit points and so on, but the setup BEFORE the levels and the subsequent rewards you can get from them is a welcome difference. You may want to head down a certain path which will bring allies by your side to help you further down the line, just as you can decide to go for it and take out one of their heroes, which will instantly give you upgrades towards your arsenal. The choice is up to you. It does have multiple endings, which allows you to go through it again without hitting the same result. 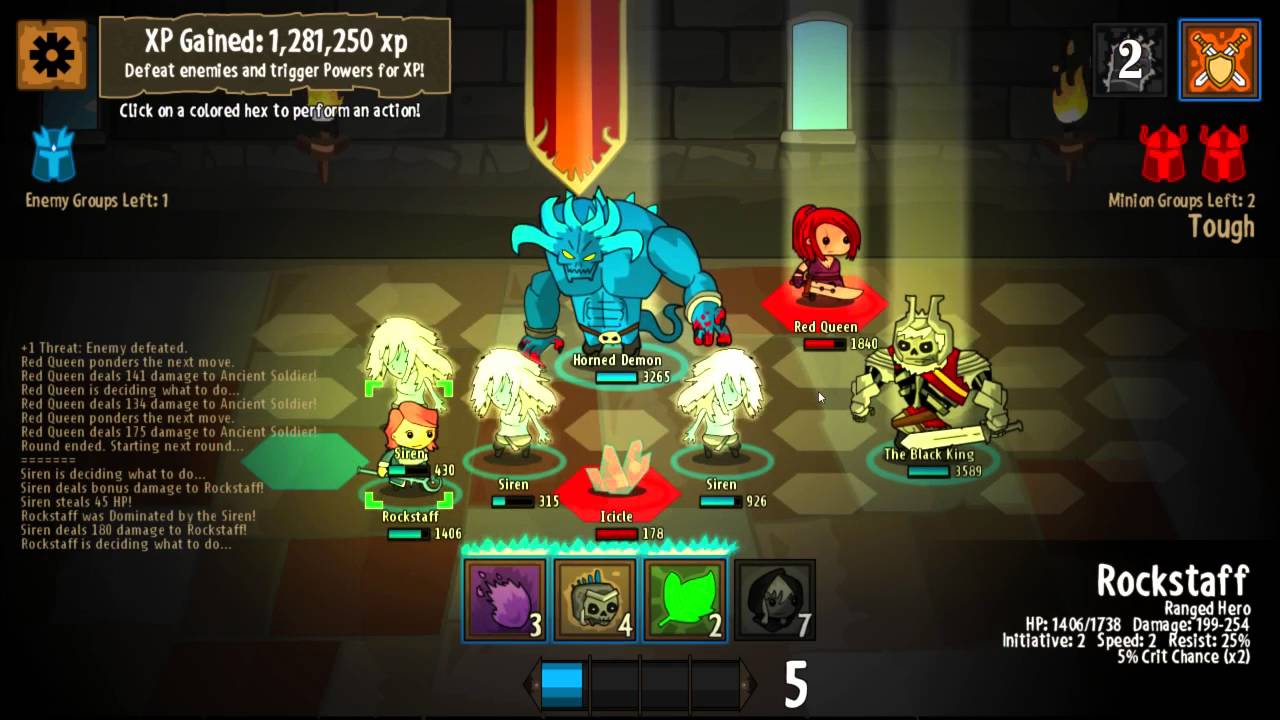 Stylistically, this has the charm of a behemoth title, akin to Pit People

If I’m honest, I just can’t get myself into this as much graphically as I would on anything either cel shaded or pixel based. It all just looks a bit underwhelming. Due to the nature of the story and the content, the colours are pretty bland, other than your usual blue for hero, red for villain saturation. Other than that, the backgrounds really don’t jump out at you. You’ll get green for grass and greyish blue for castle dungeons for the most part. I know tactical RPG games don’t normally have a name for being the great eye candy creators, but there doesn’t feel like a huge effort has gone into making this anything special.

They are functional, but that is about it.

Reverse Crawl has some nice melodic notes in it. The songs are quite quirky and upbeat and the spot effects are pleasant enough without being off-putting. It does make things a lot easier to have an audio section that makes getting through a long strategy game easier to deal with, so I give much kudos to them for that.

The most impressive thing here is that as well as multiple endings, you get to unlock an endless mode and a new game+, which allows you to take what you’ve earned from your previous playthrough into a new go-round. For a strategy RPG, this is a very good thing, as people who really get their kicks out of games like this will feel an extra buzz knowing they can better a previous best by unleashing their inner strategist upon Reverse Crawl.

In the actual main campaign itself, it isn’t the most brutal title of this genre you’ll ever get, but it’ll give your brain a small poke here and there, rather than making it cry for mercy, which they can often do if there is a massive amount at stake in later levels. I speak from a fuzzy experience though (it’s been a while...).

Nothing quite like laying the smackdown on some Greedy Heroes

There are multiple endings to get at, which will make your 1000 points a little longer to achieve, but it is mainly bog-standard get to the end and not lose members of your army achievements.

Now you have to wonder if you can get through a load of missions without losing a minion. That’s a harder prospect...

I didn’t hate Reverse Crawl, just as much as I didn’t love it either. It does the genre justice and it has enough going for it to be worthy, especially when the price point is actually at a tempting level, compared to some other games I’ve reviewed lately.

The type of game has never been one to warm my heart, so I’ve went into this with a complete neutrality. I would strongly advise you to be a fan of tactical RPGs before really getting yourself into something like Reverse Crawl. If you are, however, you’ll find plenty to keep you happy, just as long as you can get past the dreary looking graphics. It doesn’t exactly make you chomp at the bit to get yourself involved in the story, but the story is good enough to help you ease past what your eyes are thinking.

I do believe tactical RPG’s are catered for specific tastes. It does give you what you want and it manages it in a good way, in that you can tell that Nerdook enjoy it themselves, and that is always a plus, because you know it will be treated with respect, as all labour of love games are.

Very well named, as you’ll be swimming in tactics and a decent story, just don’t let the murky graphics put you off too much.