Stories: The Path of Destinies was originally released in 2016 on PC, but looking at the Steam figures, it looks like a well-received and much-loved little game. We now move three years on and see it reaching consoles and the question is normally one of whether or not we need something like this on the Xbox One. My question though goes in a different tangent, because I already know we need this game on ANY playable format, but I’m thinking more towards why more arcade games aren’t more like this and how the resurrection of an old paper book style of imagination creating has transported very well onto console.

Story - 10/10
Now, the story is short, which may put a lot of people off, but (and it is a humungous but) the actual version of the story you can have is hugely varied. The fact is that you can have over 20 different endings and it all depends on the choices you make as you progress. One minute you may be taking your main protagonist, Reynardo, to an enemy stronghold to release an old friend, but you could instead try and piece together an ancient weapon that will dispose of these nasty Ravens and their Emperor. It acts like those old adventure books you used to get where you turned to page such-and-such to continue.

What this results in is a game that you can literally finish in about an hour, but the way it is pieced together means you can continue down a different path another time, or maybe even fit in two or three scenarios in one sitting. The narrator was annoying at first, but I grew to like him, as he holds everything together. It is just such an ingenious way of playing a game like this.

It isn’t too shabby in the action department either. There’s undoubtedly a huge lean towards Assassin’s Creed and the Batman games in the combat style, but you certainly cannot miss a HUGE exclamation mark hanging over the enemy heads as they are about to hit you. The beauty for me is that as you go through different story options, it also starts to sift through new enemies to combat, making things a little harder as you go through. There’s a more straight-forward XP upgrading model, but that is perfect when you consider how small the story mode is on a playthrough. 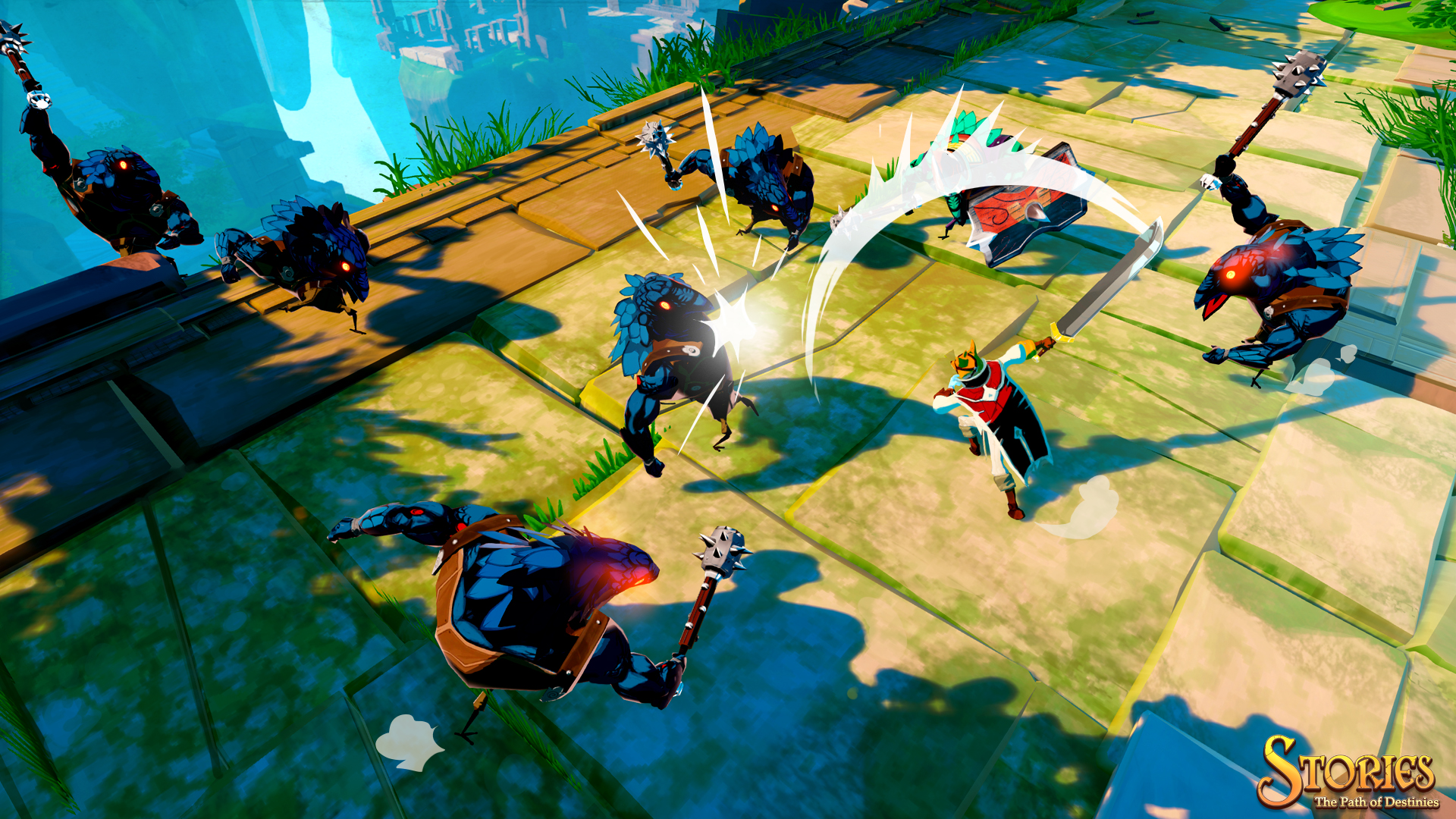 Don't ever feel overwhelmed by the giant enemies, as your even bigger sword will save the day for you

I want to really like the artistic style in Stories, and for the most part I do, but ironically the biggest gripe I have is with the fact that some of the graphics are so far away from you that you don’t really get to see them at their best. In some areas it looks astoundingly beautiful, and the way the enemies move and, eventually, perish is mesmerising. It can look just a little repetitive, but on the whole, it is still holding well after being around for three years. I certainly like it, though.

This was the section that surprised me the most. The music in this game is remarkable. It is not only fully orchestrated, but it reacts to the timeline that you’re creating as you go. OK, the vocal work can be a little hit and miss, as I had mentioned earlier on, but for the most part I do find it rather enchanting. It just seems to add to the experience, which for a game that is very quick to get through a story, is impressive.

It is a difficult one to call this. It isn’t exactly difficult, to be fair, but at the same time it does add a little more fire in the belly the more you go on, so some people may get bored early on and say it is too easy, but that kind of defeats the purpose, as it does get a little more creative in the difficulty stakes as you progress. I started to die as I moved through my third playthough, so bear with it and it will get a bit harder. It never feels like you’re gonna struggle, but it does let you have a bit of a workout, regardless.


Value - 8/10
It’s SO worth the money. For all those little stories to be completed, you’ll be throwing about 20 hours in, as well as there being different vocal responses and outcomes the more you fiddle with timelines and truths. More locations become available in some instances, so you’re always finding something new the more you delve into the game and that cannot be bad at all.

Achievements - 7/10
Nicely balanced. It rewards you for progressing through, finding different routes through the game, and for being pretty damned fancy with a sword. It works in a nicely balanced way and I can’t complain about that.


Summary
I went into Stories: The Path of Destinies fearing the worst. I came out of it grinning from ear to ear. The game may well be three years old, but a lot of arcade games (and some AAA titles to be fair) could learn from it. It manages to be a small game AND a large one at the same time. Over 20 possible outcomes, all depending on the choices you make and the key elements of those choices remain embedded in your character’s brain to give him a heads up, the further he progresses.
I can’t begin to tell you how impressed I am with this title. MORE GAMES SHOULD BE LIKE THIS, and yes, I’m saying that with a block capital vibe. It’s hard to understand why more games don’t do this. It is much more exciting to go through all these branches of story than it has been on games like Mass Effect: Andromeda and Fallout ‘76.
It could have done without the odd Unreal Engine glitches, which can result in a reset, but other than that, I’m in awe of this and I wish I’d found it three years ago. Either that or it should have come out back then. Could have been sitting there with Ori...
...Just sayin.

Posted 8 months ago by DJ TapouT