I'm just going to come out and say it...RICO is garbage.

I know the whole reason for a review is to build up slowly, tell you all the good and bad points in amongst it and then finish with a flourish and give you the score accordingly. Well, not this time. I really don’t like this game. I can see the logic behind it and what it wants to emulate, but it just doesn’t do it well enough.

Oh, and don’t panic. I’ll be going into detail as to why I don’t like it and that you would be better off going for the main comparable title this aims to be, Ton Clancy’s Rainbow Six: Siege.

Simply put, the storyline is completely irrelevant. There’s no point in talking about American drug cartels and organised crime on the other side of the pond when you have a boss who sounds like she’s on the perfume stall in Harrod’s.

It is best to ignore the storyline completely. It’s just a long-winded way of getting you to complete missions from side to side of the map. Sure, there are multiple options in who you take down and how difficult you make things (we’ll get into that later) but the way the game plays is just so DULL that you really won’t give a hoot who you’re blowing away. There is a clever side to RICO in that it is procedurally generated, but then so was Tower of Guns, and it was awful as well, so don’t let that fool you.

For those that give a monkeys about the plot, you play as a cop, with an optional human buddy cop, should you wish, who is tasked with solving a big case within a 24 hour time period. The problem is, the gameplay is just terrible. The AI are REALLY thick and you start to think that if these guys are henchmen of a big crime syndicate, the head honcho must be doing a basic arithmetic exam to prove his superiority. You’ll find rooms with big red cans in them. Fire them two or three times and just stand back. Congratulations, you’ve just emptied a room. Yes, it IS that simple and I can’t get around the fact that it is so basic. I’d just like to point out that Rainbow Six Vegas is backwards compatible and the terrorist hunt on that is far better than anything this has to offer.

I’d also like to point out (see? I get started on a rant and I can’t stop.) that everything looks the same, with repeated cloned baddies and a dodgy feel to controls. The hit points are all over the joint and it never feels like you’re getting to aim properly. There is a co-op multiplayer option, but I had stopped playing by this point, so stopped caring as a result. 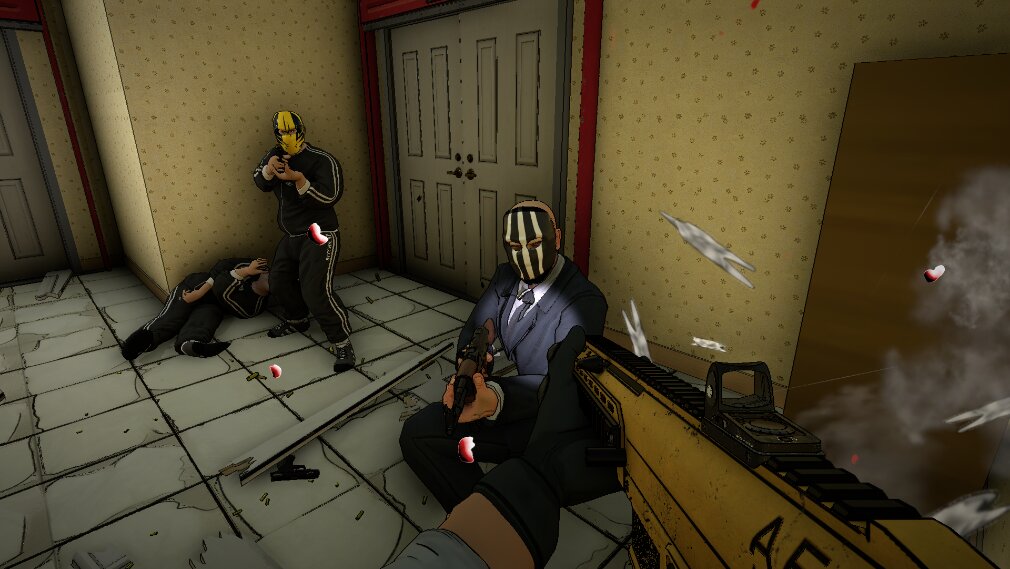 Finally a co-op title that looks and tries to feel like XIII....

RICO has a cel-shaded feel to it, but it is more like a basic version of some games that have pulled it off majestically. Madworld from Sega did a better job and that was on the Wii in BLACK AND WHITE. It probably isn’t the case in real life, but it feels like the graphics are a tad lazy. I understand that there are some limits when it comes to doing games that are never the same game twice, but everything feels laboured, even the ability to find enjoyment. The best way I can describe it is like playing the original Quake, but in treacle. The palette is about the same and the scenery is pretty bland. That just about sums it up.

Not much greatness happening here either. The explosions and gun shots are generic and sound like they’ve been lifted from a game in the 90’s and the vocal work is not exactly full of storyline. It does enough to drown the silence, but that is it. It honestly doesn’t do anything else.

No... Just no. There is no difficulty. Even on normal I felt it was remarkably easy, but then I played the Rainbow Six series to death and I feel like I can do these games well enough. Everything is just so lame and pointless. With a second player this would be even more simple, but I never got the conviction to try, such was the monotony. If there was any positive thing about RICO I’d be shouting it from the rafters, but for all the time I played it, there was absolutely no feeling like you were in serious danger. The biggest enemy against you is either time or those red barrels if you stand too close to them. ....It's just a shame you probably won't play it long enough to care

There’s no way I’d play this long enough to warrant checking what the achievements are like, but then again, I’d give you one of those for switching it on, as that is a challenge in itself.

RICO does not deserve attention. It is a crime in itself to play it and gives no enjoyment whatsoever. The graphics are so old and basic that you should expect a 60 frames-per-second experience. That isn’t there. The AI is horrendous, as is the aiming and the dialogue, the voice acting, the graphics, sound, difficulty. Honestly, there’s nothing that you can remotely enjoy from this. It is more expensive than Rainbow Six: Siege and doesn’t give you as many options. Not to mention Ubisoft’s title is the gift that keeps on giving with new maps coming frequently.

I do like the idea of having a time limit for a game of this type and there are one or two ideas that, maybe in either a different game or a better version of this, would work. We have to look at what is here though, and in a day and age where a console is reaching the end of the line in terms of being a powerhouse, I’d expect better than this, especially when downloading games will be a big thing in the next generation.

I’d give it zero, but The Grand Tour has a special place all of its own. This can literally, in every sense of the word, do one.