I remember seeing the game Papers, please! when it came out a while back and thinking I was missing out. It intrigued me, but I couldn’t tell if it was because I couldn’t get hold of it. It was PC only and I never felt the urge to get it and held off hoping something would come to consoles.


Now I have my wish, as Beat Cop is seen as a game in that style. I have always been a big fan of the pixel art style of gaming, so it instantly perked up my interest. The only thing that puzzled me is what Beat Cop would play like and whether or not my interest would hold for long enough to get the most out of it.

You play Jack Kelly, a detective who has been demoted to traffic because of an investigation gone wrong. On the first day of the job your partner who is, strangely enough, one day away from retirement, is gunned down in a drive-by shooting and you are left to walk the beat and find out who killed Fat Mike. As you do so, you begin to walk the beat and find out more about the people who inhabit the street, from the Italian Mafia in the pizza place to “The Crew” and their hangouts.


To start with you go about chatting to the public, as well as booking in tickets for traffic violations. As time goes on, you get to do more, but you’re ALWAYS against the clock. You are on a day shift and if you don’t get things done by a certain time of the day, you miss out, which can impact your XP and respect towards those you are trying to protect.


It is really clever in the way that all things you do seem to have an impact on how your story pans out. The only down side is that, much like any job in real life, you do feel like there’s a lot of repetition and that there’s no way out of it, which when you’re trying to enjoy a relaxing evening with a controller in your hand can sometimes put you off. 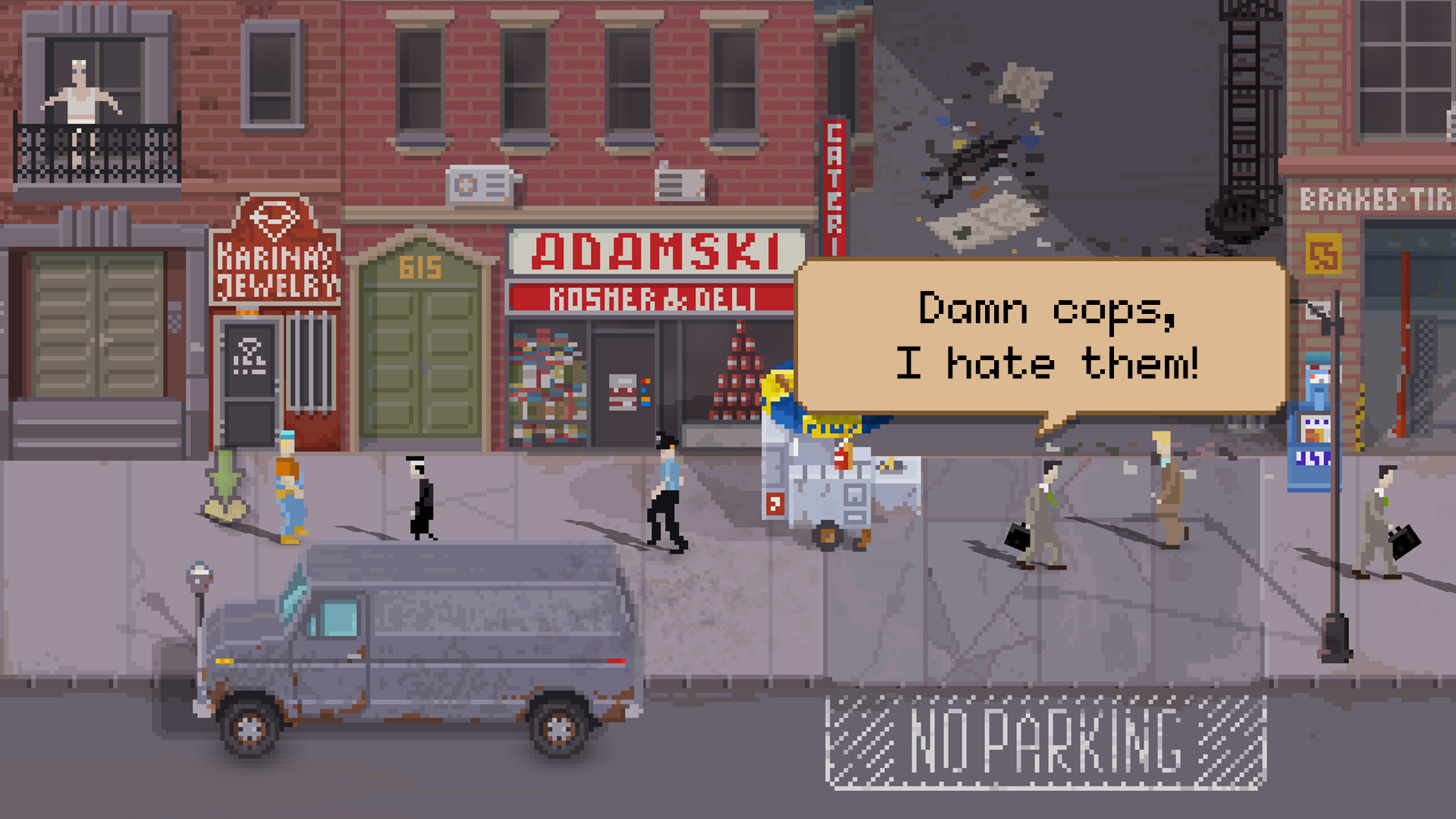 They may hate them damn cops, but we like the feel of this title

Beat Cop looks amazing, but then this is just the kind of game I’m into. The intro is incredible and it really sets you up for what is coming. There are times you almost feel like you’re playing an old school LucasArts point and click, such is the way the graphics look, and I’m totally down with that. The animations are pretty decent and it is very colorful. I have always been a big fan of the rejuvenation of pixelated graphics and this warms my heart. The fact that the detail is just the right side of good also helps, as some of these can either try to be too detailed or basically look like a dot having a panic attack, This pleases me.

There are some lovely nods to 80’s culture throughout Beat Cop, but the music and audio leans towards it more than the other parts. The main title music is punchy with enough cheese to make the cows worry. The spot effects are proper noises, rather than the almost NES-like cracks and chomps you usually have when you’re heading back to a certain day and age on a gaming basis.

I’d say it is more of a difficulty to play through this for a long time than it is to beat the game, as there never feels like a point where you can’t get out of a bad situation. With no pun intended, the plod is there and you do feel like you’re constantly heading over the same old ground, with the plot hits and variations not coming fast enough for my liking. Not to mention the people trying to buy your forgiveness appear far too often. It's not really a game that is aiming to be difficult, but it doesn’t feel like there is a direction at all, even WITH a story.

Being a beat cop 101, making sure you constantly watch those cash registers

The achievements are varied, but hard to get. You get one for visiting an old dear with a box of donuts, which is pretty random, making me think that there are plenty more of the same, but can you head through Beat Cop enough to want to look for them? That is a different matter entirely.

Beat Cop is a strange one. On paper and on the initial load, it filled me with a lot of optimism. I felt like I’d be looking forward to reliving my youthful movie watching through pixelated glasses. The intro was brilliant and the build-up was great. It really had me excited about getting through the regular day-to-day work as a Beat Cop.
Then I started to play a bit more...


After a fair bit of time with it, and as much as there is a main story in amongst it, that monotony from doing the same thing on a daily basis just grinds on you. You can only book so many tickets for parking violations or tyres, or arrest perps by having a Popeye style clouded fight with them. Like those donuts, it looks lovely on the outside, but there isn’t enough substance to get the goodness from it.


And therein lies the problem. This could have been an essential game to play. I would have quite happily sunk loads of hours into this, as it had the potential to keep me hooked for a long time, but the tedious nature of the rest of it just couldn’t hold my attention to the bits that mattered. Another 5 tickets for parking, another 4 Crew members arrested, another 6 people bribing you to get away with a ticket of any description. It’s all good for the first few days, but the constant drone just weakens your resolve.


Like a hardened criminal, this game has lost its appeal and feels like a prison sentence, but there are those few moments of parole that seem to squeak through. Just not often enough.

Posted 8 months ago by DJ TapouT