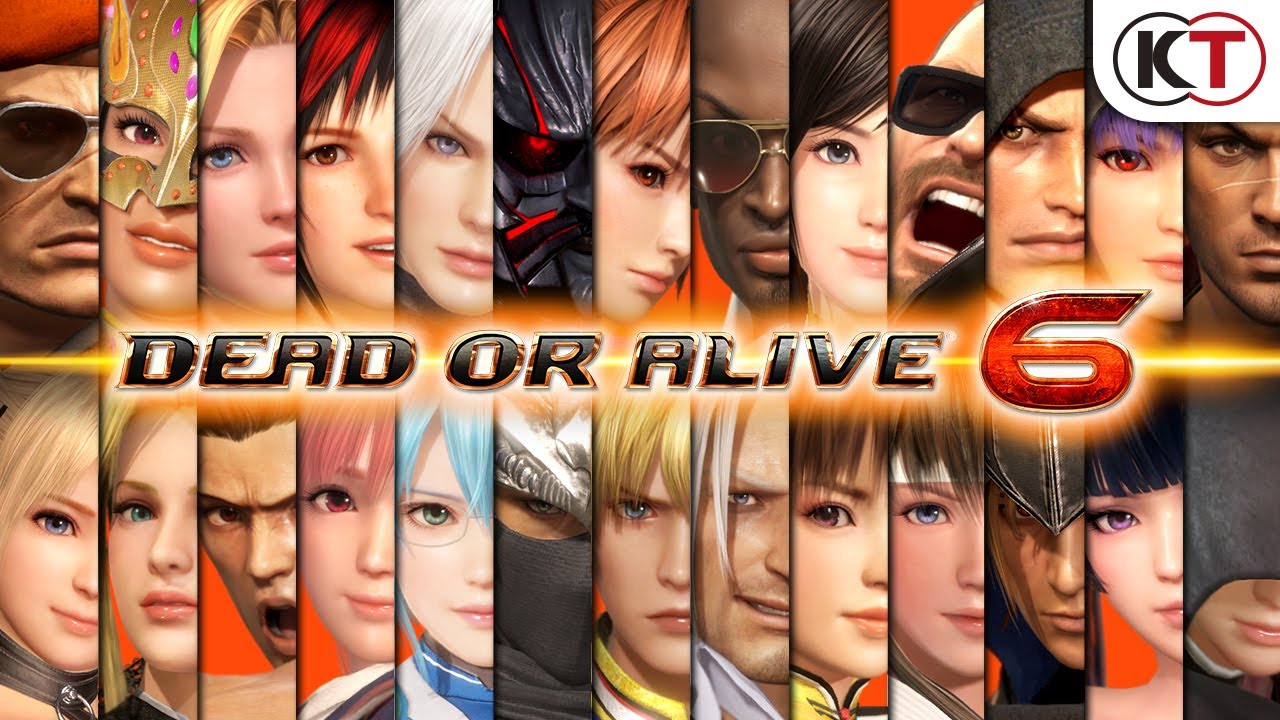 Did anyone ask for this?

I mean, I don’t remember the urge to think I needed another Dead or Alive game. From the gaming developer that had a reasonable degree of success in the 90s, in particular with the Ninja Gaiden series on the original Xbox and the 360, with a small whimper from Dead or Alive 2 on the Dreamcast, we end up with what can only be described as the sequel that pretty much nobody asked for. Considering we got Nioh, which wasn’t too bad, on the previous generation, can we expect Team Ninja to come back with something special.

Gameplay 6/10
The answer is... not particularly. There has always been one thing that stood out about the Dead or Alive franchise (two reasons if you want to be a bit more sarcastic about the whole matter) and the fact is we are now living in a different age from back then. The gameplay side of things feels reasonable enough, and I can see an intricate fighter underneath. The thing is though, it has started to steal from some of the other fighters out there and it genuinely feels like it has been bolstered on. For instance, we have the Mortal Kombat X-Ray moves, which are now done through a similar shoulder press here. Instead of going all brutal though, you get a more Street Fighter darkening of the background, as if Akuma is about to unleash 1000 fists.

What I remember about the old Dead or Alive series was how much I liked the simplistic methods. It was more like Virtua Fighter, in that it really didn’t need too much to make it a game that was easy to pick up, but very hard to master. You don’t feel that anymore. I can’t help but feel that it just lacks in originality and that it’s sold out in order to fit in with the rest. It is because of this that it doesn’t stand out and I don’t feel any attachment to it, which is a shame, as I’m from an age where 10p pieces were only ever used for adding a credit, so it feels a bit deflating to come across a game that had a decent past, but a more average future.

There is a story mode, but it is done so strangely that you’ll get lost after a few minutes and lose the will to crack on with it later. You can train, play online (although if you’re anything other than a master, be careful). There’s also a quest mode which feels more like you’re just ticking boxes to unlock costumes. I suppose this could be fun if you fancy unlocking some swimwear.

The graphics have always been colourful and sharp on Team Ninja products. Dead or Alive 6 is no exception. It was never going to be SUPER realistic, but it sits on the fence between Tekken and Soul Calibur for the aesthetics, which makes things unique in that respect. There are some pretty impressive moments when you’re changing stages during a bout, and they’re properly awesome. Some of the drops are so vast that you find yourself gasping for air as the battered combatant heads towards the deck further below.

It isn’t TOO realistic though. All the character models look like they’ve been taken from Shenmue III and polished up a bit to look current gen, but that leans towards the charm of Dead or Alive. It’s never really been trying to be photo quality lifelike, but as a whole, everything looks nice.

It is EXACTLY what you would expect. Japanese fast rock in the menus, add some electro into the mix for the stages and that just about covers it. There are always some predictable elements in certain games from the land of the rising sun, and the audio is pretty much what it needs to be. All the spot effects are on the money, but as usual, the voice acting needs some serious work. It feels like we are being transported back to the Resident Evil days and the “Master of Unlocking” school of acting. Does enough though.

Now, before anyone has a go at me, I’m looking at this as a non-seasoned player, meaning that I haven’t been putting time and effort into properly learning the moves, like I used to with Ken from Street Fighter and Paul from Tekken (no, I don’t know why I picked the red dressed blonde guys either)

I’m a bit older and now non-the-wiser, so I’m a little more simplistic when it comes to playing these. What I do know is that the easy modes are way too easy and the harder ones leave those not willing to put the time in scared and pondering over what they bought the game in the first instance. I did look through the tutorial, but it felt like it went right over my head. If you’re willing to put the time in, I think it will give you a proper challenge on the harder settings, as well as going toe-to-toe against an actual human opponent. 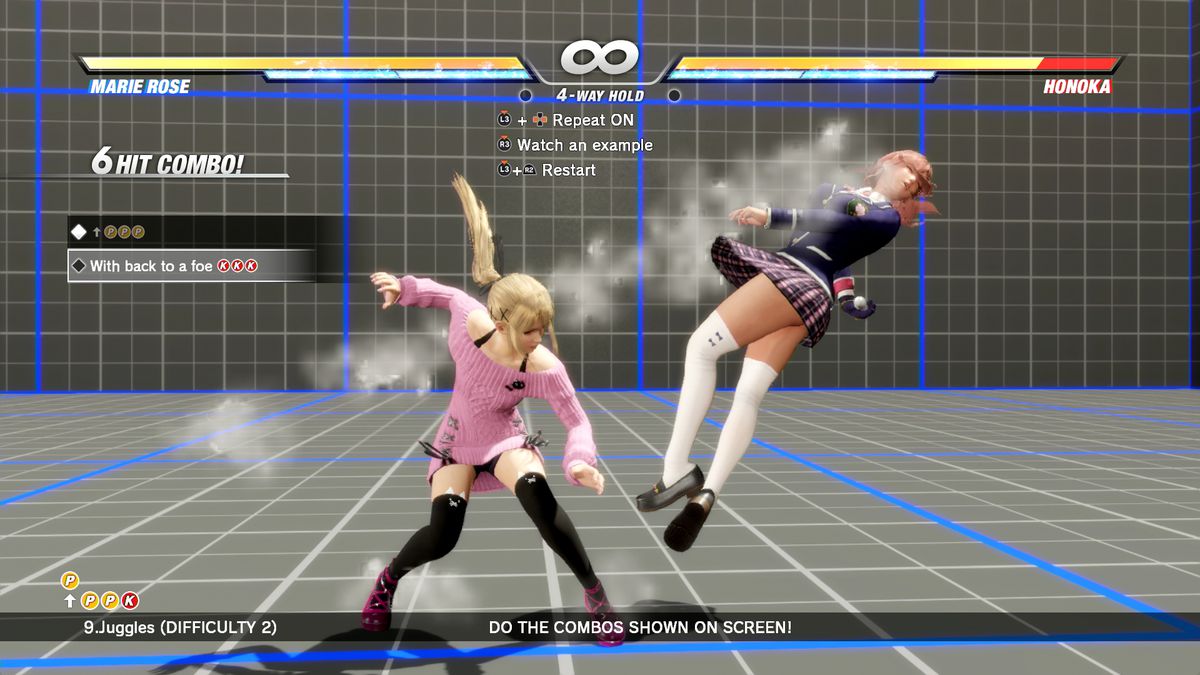 This is one for the more adventurous amongst you. There are a couple of standard stage completion achievements, but you’ll be struggling to get all the points on this. You will need the patience of a saint and the ability of Neo from the Matrix. Good luck.

I can see why this is a franchise that has been around for a while, but in a day and age where we are looking for more, this falls short. It does deliver a fighting game with little nuggets of intricacy, but you feel like you’re stuck in the dark ages, especially with the fact that the bouncing is STILL there (I’ve done well to avoid talking about it until the end, to be honest.) We’re in 2019!!! At a time where we’re looking for full on equality, we do not need a videogame heading in the wrong direction. I think it needs looked at, should there ever be another release.

As things stand though, we have a game that hasn’t got an identity due to borrowing from other franchises that have evolved to keep their freshness. Dead or Alive 6 simply hasn’t done that, and with Street Fighter V at a low price point and Mortal Kombat 11 not far away, do you really want to be opting for this at a full price?

I think I’d thrown in the towel before the feeling of getting ripped off knocked me out, which is a shame because there IS something decent in there. It’s just that everything else gets in the way.