“I’m just going to tell you right now, I’m not gonna totally bad mouth a game that costs less than 1 pound.”
This was how I started the World Enduro review, which as some of you will know was not that long ago, to be honest. The difference is that Pumped BMX Pro does not have the luxury of hiding behind the cheapest price tag on Xbox Live. This means I get a chance to pretty much go through this. Not politely with a fine-toothed comb, but actually GO THROUGH it...

There are 60 levels and 200 challenges spread throughout this game, but I want to get one thing perfectly clear from the off, your interest will have died pretty early on, so you’ll not give a toss. Let me tell you how I got on, although the review video will tell you more than enough. There’s no love for this game left in me. Not that I had much to start with though, let’s be fair. The difficulty swerve is absolutely chronic. I got to world 2, stage 2 and I actually gave up. I just couldn’t bring myself to continue playing the game because it is SO BLOODY ANNOYING. The gameplay can be beaten by a 79p game put together by a guy in a bedroom. That should not really be happening.

You can land perfectly after a trick, for example, and STILL not carry enough speed to get over the next gap. I’d rather go and buy a real bike, try it out and then head to hospital instead of putting up with this. All the riders look the same and the colours of the bikes look like the only major difference. I really don’t get why this was released with no online mode whatsoever, other than leaderboards. You have an established series like Trials that is giving you track editors as well as the usual stuff online. That gives you some substance and value for money. If you can’t really get by the second world on this, you can’t say the same. Let us hope that this ice is not thin hey

I won’t be so harsh on the graphics though. There’s a nice feeling to the look of the game that pleases on the eye. It isn’t perfect, but it certainly isn’t the worst I’ve ever seen. It kind of reminds me of something you got on the 360 when the Kinect was being shipped out. You do think of it as something that the kiddies will like while they are getting on with the job of playing it. There’s no question that everything is polished and clean, but other than looking like a kid game that makes you feel a little silly playing it when you’re a middle-aged man, there’s not a great deal to shout about. I’m not saying it looks bad, but it just doesn’t jump off the page. Mind you, you won’t get far enough to see much anyway.

Like Stealer’s Wheel, I’m stuck in the middle on this one. The sound effects are usable and do what they need to and the music is ok for the first time you hear it. The problem with the melody is that you will hear it repeatedly and trust me, you’ll get bored of it EXTREMELY quickly. There isn’t much else to it and it just helps to enhance the boredom you feel come across you when playing Pumped BMX Pro. Mind you, I haven’t got to the worst part yet...

As much as I would love to swear (and I can assure you, I did when I was playing it at home) I cannot stand the difficulty on this. I’m pretty sure a 6 year old could do a Yoda on a controller and magically make this work, but I can’t. As I have already mentioned, I got to world 2 and no further. I then decided to give up, saying it loudly in said house in protest. It sits in that unhealthy difficulty curve and I really don’t like it at all. Games should encourage you to play them, not run towards the off switch like your life depended on it. 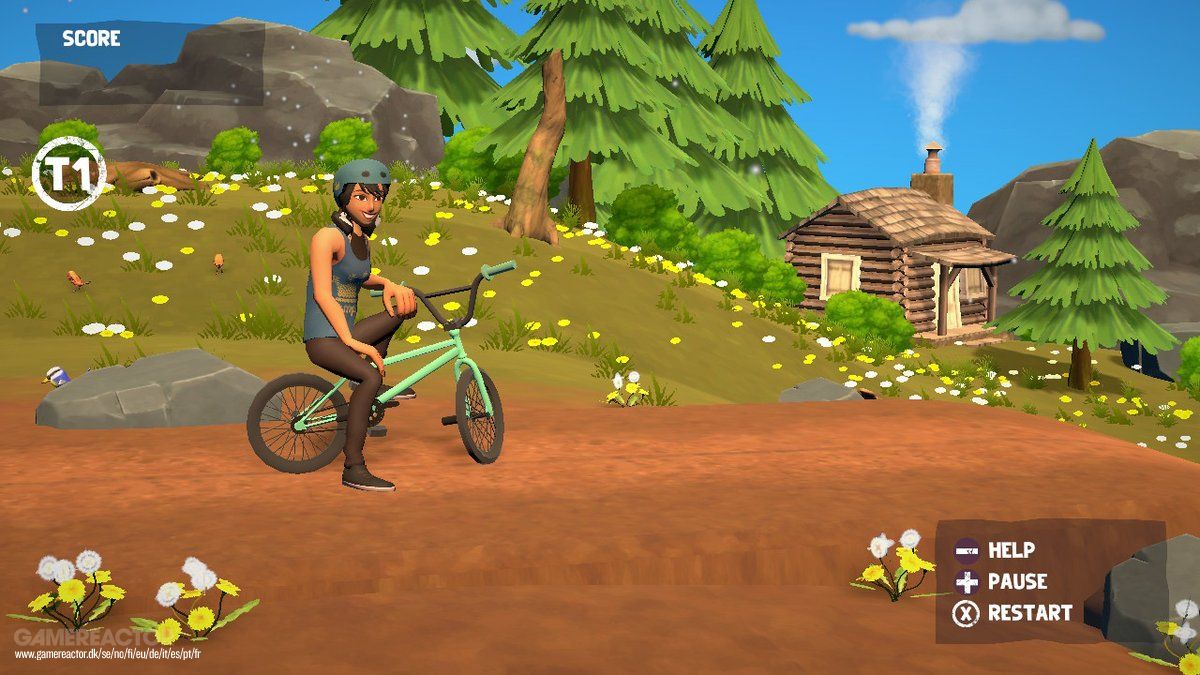 I’ll be honest, other than world one, I couldn’t get far enough to warrant a score on this, so I don’t want to get anyone’s hopes up. If you’re really stuck, buy an old game with an easy 1000 score because you’ll do better from that than you will here.

There’s really no reason to go for this when there are other options out there. The fact that Trials Rising is literally hitting the shelves as I write this proves a very big point. Yes, I know it is about double the money, but the amount of time you would spend on that and the things you can do is infinitely more.

Pumped BMX Pro feels like a game that will just sit there and be unloved by most, other than those who just need to have their patience wrecked. You will not get the enjoyment you should out of this, you won’t bother trying to do the tricks it asks you to do and it just saps enjoyment out of you very quickly. I wanted it to be decent, simply because I do like this game style. I love the Trials series and I also think the Joe Danger series is vastly underrated. It was obvious the clones would arrive, but they need to be decent to entice people. Pumped BMX Pro just doesn’t do that.

If it were me, and I’ll be honest, this is very close to actually happening, I’d use whatever cash you would put into this and spend it on Trials Rising, or even if you want to spend no additional money, get Fusion or even Joe Danger and use the change on food for a movie afterwards. Pumped BMX Pro does try hard to be enjoyable, but it really isn’t, and it takes a lot for me to rage quit.

Hit the “WHY” button and restart.