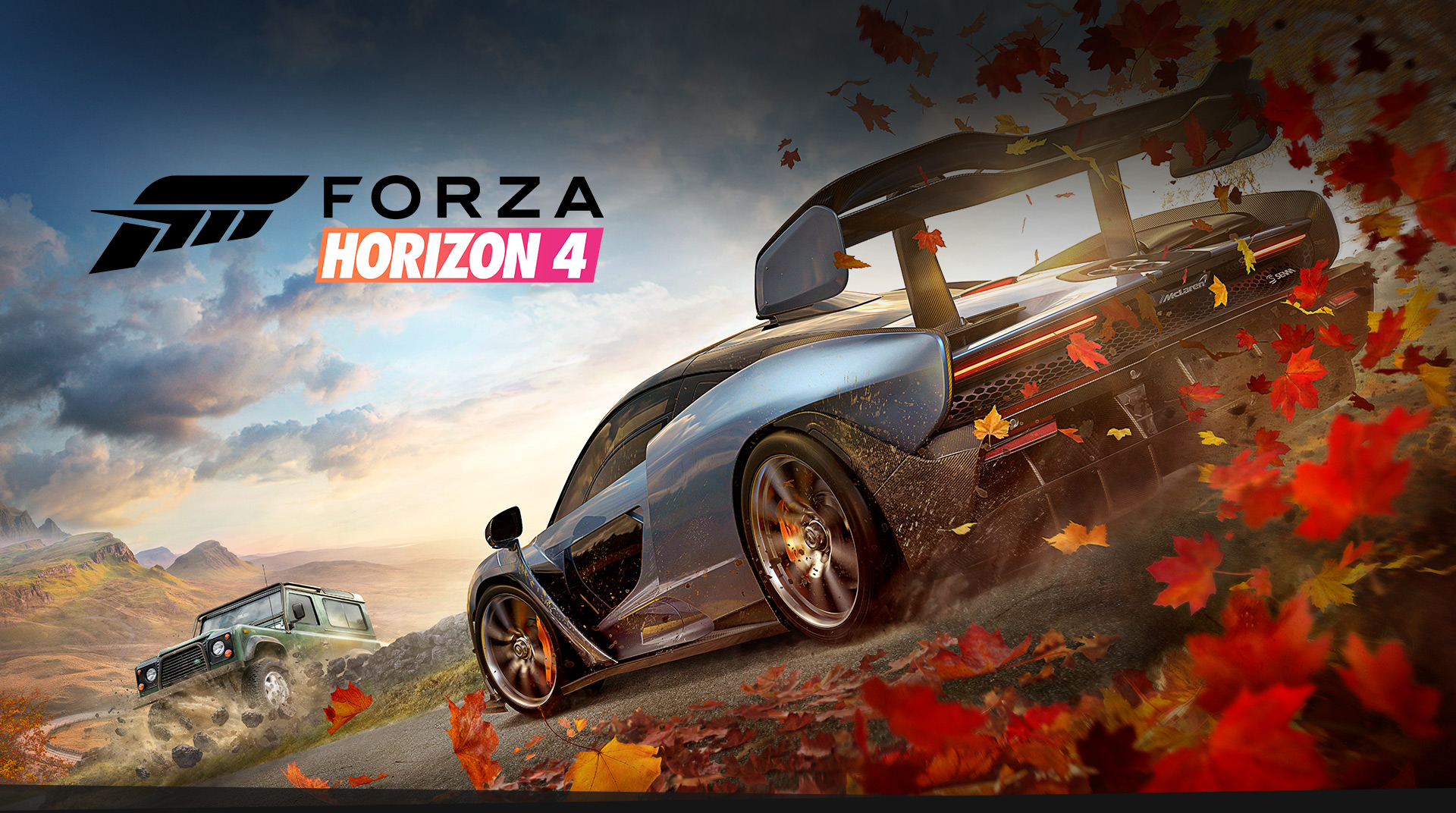 I LOVED Forza Horizon 2. Strangely enough though, I didn’t really bother too much with number 3. I can’t put my finger on why I never really enjoyed the one in the middle of the even numbered racers in this series, but it never really grabbed me in the same way Horizon 2 did. Perhaps it was something to do with the fact I’d never really seen anything quite like it. It was like a typical franchise, with the first one doing a grand job of paving the way and then the second one getting everything right and listening to feedback to further enhance the experience.

All I can say is, Forza Horizon 4 is head and shoulders above the other entries in the series and really shows what you can do when you really get used to the vehicle you’re sitting in, which in this case is powered by a game engine that’s evolved over the past 8 – 10 years.

The biggest addition to the series yet is that you have all four seasons of weather available, which then results in a variation on your driving experience. During the winter the roads are a bit more icy and therefore its more difficult to keep your car/van/Warthog on the road, but you know you have to compensate for it. Just don’t be a spanner like me and try and do a speed jump in the winter, as your back end will be moving around like you’re on Love Island. The other times of the year are easier to drive in for the most part, unless the rain hits you, which then results in a more challenging drive. The fact it is never the same makes it more fun to go off on a random road trip. I used to hate having to go from place to place in Horizon, getting bored rigid because nothing was ever different, but with 4, you could be going through one section in Summer and then you have to go back in Autumn and it changes the complexity of the surface and makes you more attentive to what you’re doing.

The other big thing for me has to be the choice of location this time. As much as it isn’t the WHOLE of the UK, they’ve picked a highlights reel and you’ve got some choice places, including Edinburgh, which, for a Scottish arcade racing fan who adored PGR, is very VERY dangerous. At the time of writing I’ve unlocked the capital and I have to be honest, I really don’t want to leave it. It brings so many memories flooding back of the old Xbox 360 days and it is things like that that this game is all about to me.

There’s just so much to do in Horizon 4 as well. My favourite time trials are aplenty in here, and as any arcade racer will know, a time trial you can spend half an hour trying to better is almost addictive in its execution. Barn finds are back, as well as the big events that can ONLY happen in games like this, such as you racing in a buggy against the iconic Flying Scotsman steam train. All of this AND multiplayer involving multiplayer competitive and going around with your friends in a convoy, then there are the events you can create yourself using the layout of the HUGE map. It’s literally the gift that keeps on giving. Almost scary how big this is, seriously. Bear in mind, this is WITHOUT any DLC yet. 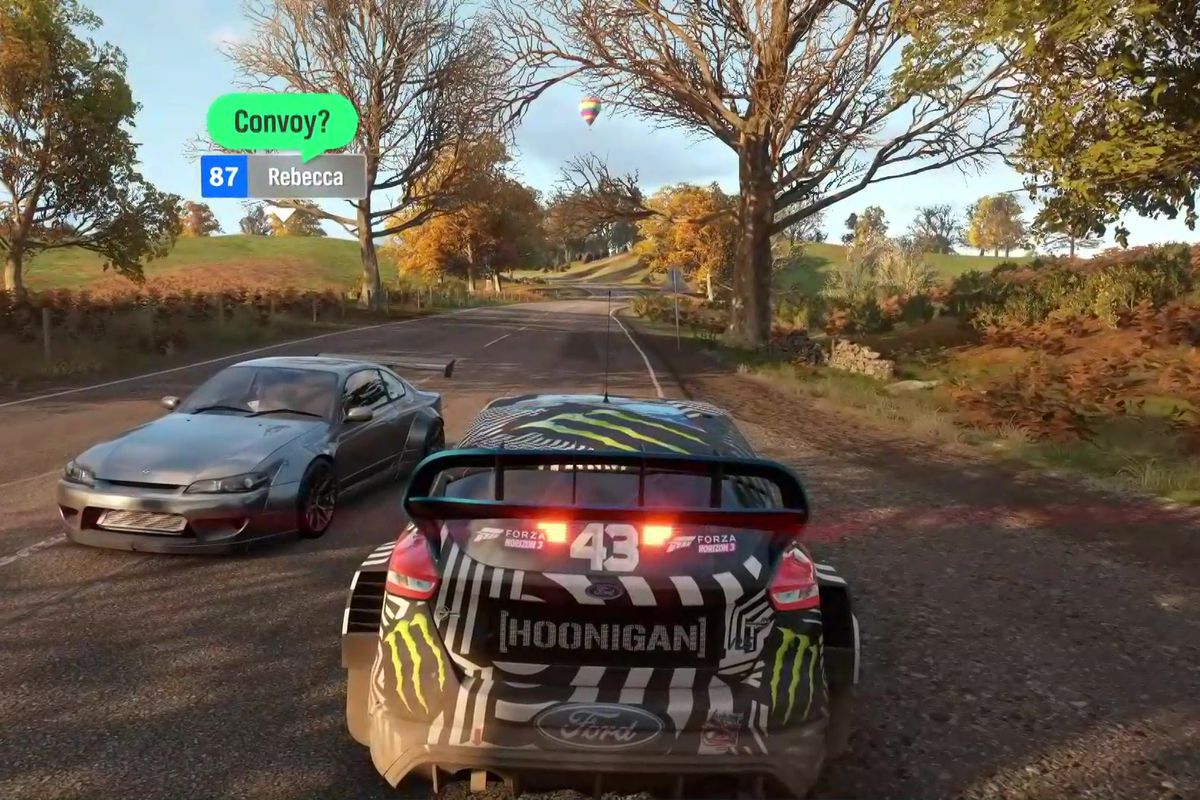 This seems like how the Fast and Furious got started?

It isn’t Daytona USA (showing my age a bit) but honestly, the engine noises are smashing and the choice of music is very broad as well. I always choose classical, but I think I’m a little bit on the mental side. There’s a radio station to suit most people on here, unless of course you really can’t listen to anything other than Swedish Black Death Metal, but then I’m not an expert.

The vocal work is ok, as it is just your usual filler for a game like this, but to be honest, the engines are the star of the show. Listening to a Cosworth screaming through the English countryside is beautiful, as well as a brand new Mclaren skidding round corners, missing stone walls by inches (well, I say inches, I probably hit them like everyone else. I’m just going too fast to notice) Forza has always had a great lineage with the sound of the combustion engine and this source material is put to great use here.

You can have this game as easy or hard as you like, much like the serious big brother. You can have it with or without a clutch, as you slide into the feeling on manual gears, or you can make the AI as thick as the brown stuff in the fields of that farm on your left as you get to first in less time than it takes to turn the ignition key on. It is truly up to you what level you wish it to be at. The fact that it judges how you perform and can ask you if you want to raise or lower the difficulty ensure you are keeping this at a level that tests you enough to keep you interested, but not hurling the pad at the telly because the game is mistreating you. You always feel that any fault is purely your own.

It is a great tester and it is always harsh, but fair. Arcade racing should ALWAYS be like that.

Nothing says pimp my ride more than a gold car

The only thing that hasn’t really changed is that the achievements, although named differently, don’t really change over the years. Finish a festival, beat an event, do well in a time trial. The amount you get moves nicely in tandem with how you play it and that is all you can ask for.

It is a joy to play Forza Horizon 4, it really is. You get so much to play with from the minute you turn the key until it’s time to pull into your homely service station for a takeaway pizza. There’s so much on offer and the fact that you’re racing in Britain makes you feel (well, I do anyway) like it’s your home event and that adds a little bit of that warm fuzzy feeling to everything you do.

Think of a selection box where every bar of chocolate is one that you KNOW you’re gonna wolf down without even shoving your nose up in disgust. Forza Horizon 4 gives you that in a package that screams quality. This is the best of the series without fail and it just plays like a dream. In a day and age now where the arcade racer has been in decline, this series acts like the shining beacon of hope in an otherwise sorely beaten up genre, with Onrush being the only other arcade racer to come out in recent months, and we all saw what happened to that (You don’t go on PS Plus THAT quick if you’re great, or be £8 in shops for that matter.)

This game will make other racing games British Racing Green with envy and is an essential in every way.