Drive on Moscow is a turn based strategy that feels a lot like games like Risk.  You move your troops around and try to cut off supplies and demolish the opposing side.  So how does it stack up?  That’s why you got me.  Shall we?

Story and Gameplay 6/10
The Story takes place during the German invasion of Russia in World War II and you best be ready to read.  As the story, if you’re not a history nut, is written instead of spoken or shown.  . During the game you play as either the Germans, named the Axis in the game, on offense, or as the Russian Soviets on defense.  While the missions are long and few the game feels like you’re going from battle to battle in the midst of a war on both sides.  It may not be the best representation of a story but it certainly isn’t the worst and I honestly thinks it complements the game.

The gameplay is also very simplistic…at first glance.  If you have every played a game like Fire Emblem or Risk you will feel right at home here as well.  You move your troops around and try to complete objectives as you fight your opponent for victory points.  Victory points can be earned by holding strategic cities on the map, but the points are lost if the enemy reclaims it, so you have to either keep a unit there or form a blockade to keep enemy units out. The other way to earn victory points is by holding certain areas on the map that offer one point per turn that it is held. The other way to win is by encasing or controlling Moscow. You can also lose victory points when playing as the Axis by losing a unit on the battlefield.

There are four levels for each campaign, once while playing as Axis and the other as the Soviets. Axis is always on offense and goes first, whereas the Soviets are always on defense and go second. The campaigns are exact mirrors of each other which is kind of repetitive but that’s ok as they feel like different missions.

There’s always a lot happening on the battlefield and sometimes it can be a hassle to keep track of everything but dam is it fun.  The game made me really think about every move I made and rethink every possible outcome of moving each troop.  I was constantly asking myself, “Can this armor unit defend a city by itself?”  “Should I try to attack or wait for the enemy to get closer to all of my units?” etc.  I enjoyed being out into the frying pan as I looked for a way out , the game does an amazing job of making you a strategy expert, because if you’re not you will never win.  We will get to that though. 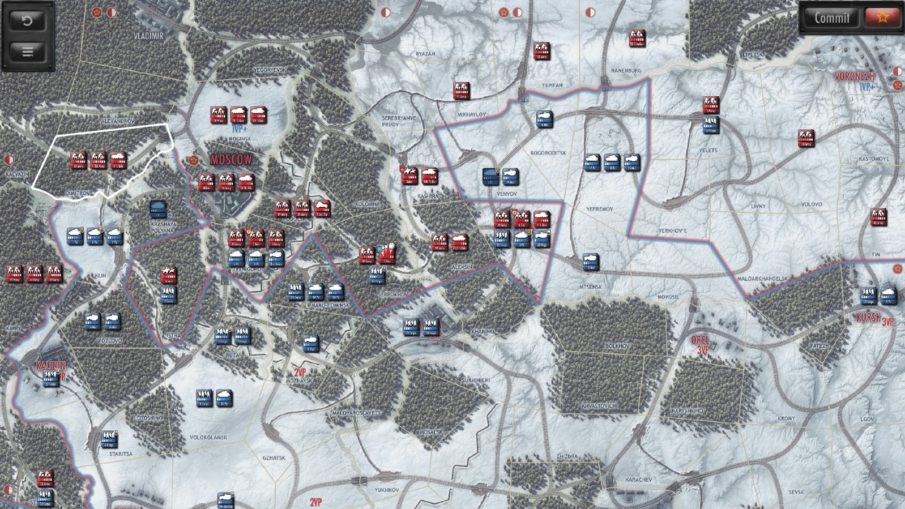 It’s gets pretty snowy in Russia

Graphics 3/10
The bare minimum was put into graphics here.  The entire game looks like a board game and hopefully you like reading because all the tutorials, maps, and everything else is text and/or documents.  I couldn’t help but feel underwhelmed in this part of the game, it felt like I could have played this on my table with a friend and I wouldn’t have known the difference.  It really didn’t help that the home screen was blurry with poor resolution.  It was very obvious from beginning to end that the games development was focused on strategy tactics and all other parts of this game suffered for it.

Sound 5/10
The music sounds like a war theme and fits the tone of the game nicely however it’s the lack of variety that found it so low on my review score.  As stated before due to the complete focus on the strategy tactics and everything else has suffered.  The sound of the actually gameplay is just guns shooting off at square cubs of your units, the music is nearly the same all around, and the moving of units just sounds like something being moved on a table.  I just feel like given the time this game could have been on my favorites and I could have lost myself in its gameplay but without anything else to anchor me down it’s hard to say it was enough.

Get ready to read!

Difficulty 9/10
This game is hard, which I love.  The AI in the game is a master strategist even on the easiest difficulty.  It’s a great example of how strategy games should be.  I had to go out of my way to write things down including notes, strategies, units, the list goes on.  I had a full piece of paper with arrows going every direction and honestly it really shows the developer understand the genre.  This genre is one that requires a certain amount of skill and if you’re looking for a game that requires you to be good look no further then Drive on Moscow.

As simple as this looks, it’s not get ready to run multiple scenarios in your head.

Achievements 5/10
There are a good number of achievements here that I found near impossible for the difficulty of the game.  The instant victories come from surrounding Moscow are extremely hard and despite my preparation and experience in this genre I couldn’t get it once.  While most achievements can be unlocked by beating both campaigns the remaining achievements are a task in themselves, sure you can use the save scumming method but even then you’re going to find yourself doing it over, and over, and over again.  I really want to like you Drive on Moscow.  Why are you making it so hard to like you? 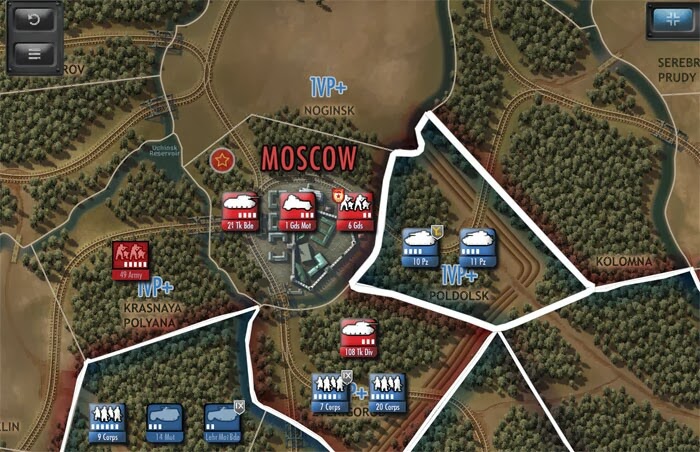 Summary
This has been by far the most difficult game to review.  I love what they have down with the tactics and the amount of effort it takes to master their game but it just falls short on every other aspect.  I hope this game does well and I hope their next game is everything this game could have been but as of now Drive on Moscow is a mediocre game with amazingly done AI and strategy.