Fortnite's closed beta has been available for almost two weeks now and according to many players is riddled with glitches. The latest patch, which is live, and shoots to fix most if not all the issues players have been having.  Here's a list of the issues:

• Players are sometimes shown 0 zone score and XP when completing missions, but are still awarded XP and Skill Points upon returning to frontend
• Friend and Party Invites/Joins are sometimes delayed, or fail altogether.
• Purchasing the Weapon Transformation node does not unlock Transforming in the Armory.
• Global Chat shows a "Joining general chat" message to players who have communications blocked.
• Party Finder does not populate newly added Xbox Live friends while the title is running.

They also released a plethora of updates.  Here's a list with some screenshots of them in the game:

• Added options in the Settings menu to turn off specific HUD elements. 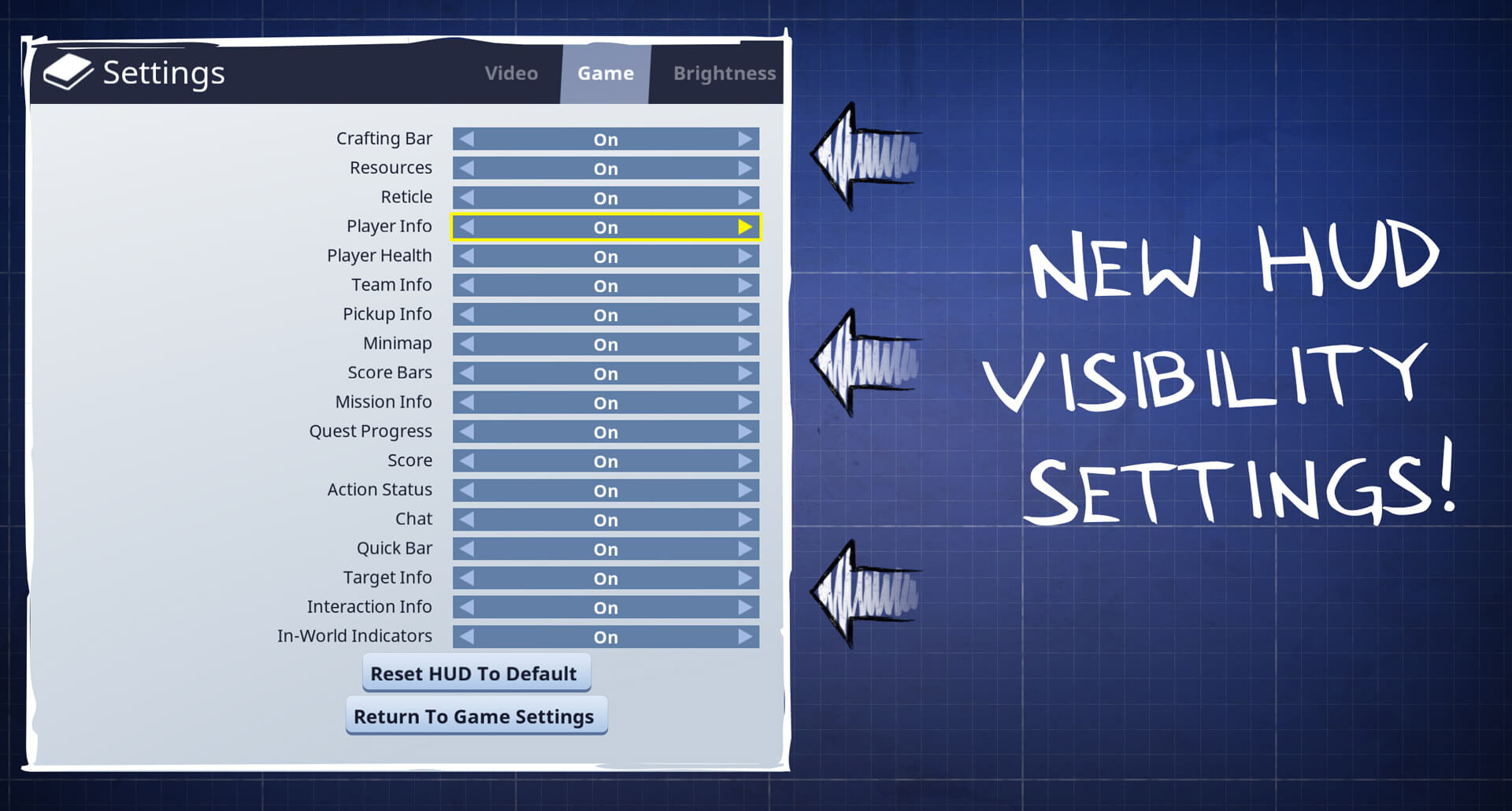 • Items are no longer marked by default for recycle when entering recycle mode, making it more difficult to unintentionally recycle the wrong item.
• Added an option to toggle visibility of hats and backpacks on Heroes. 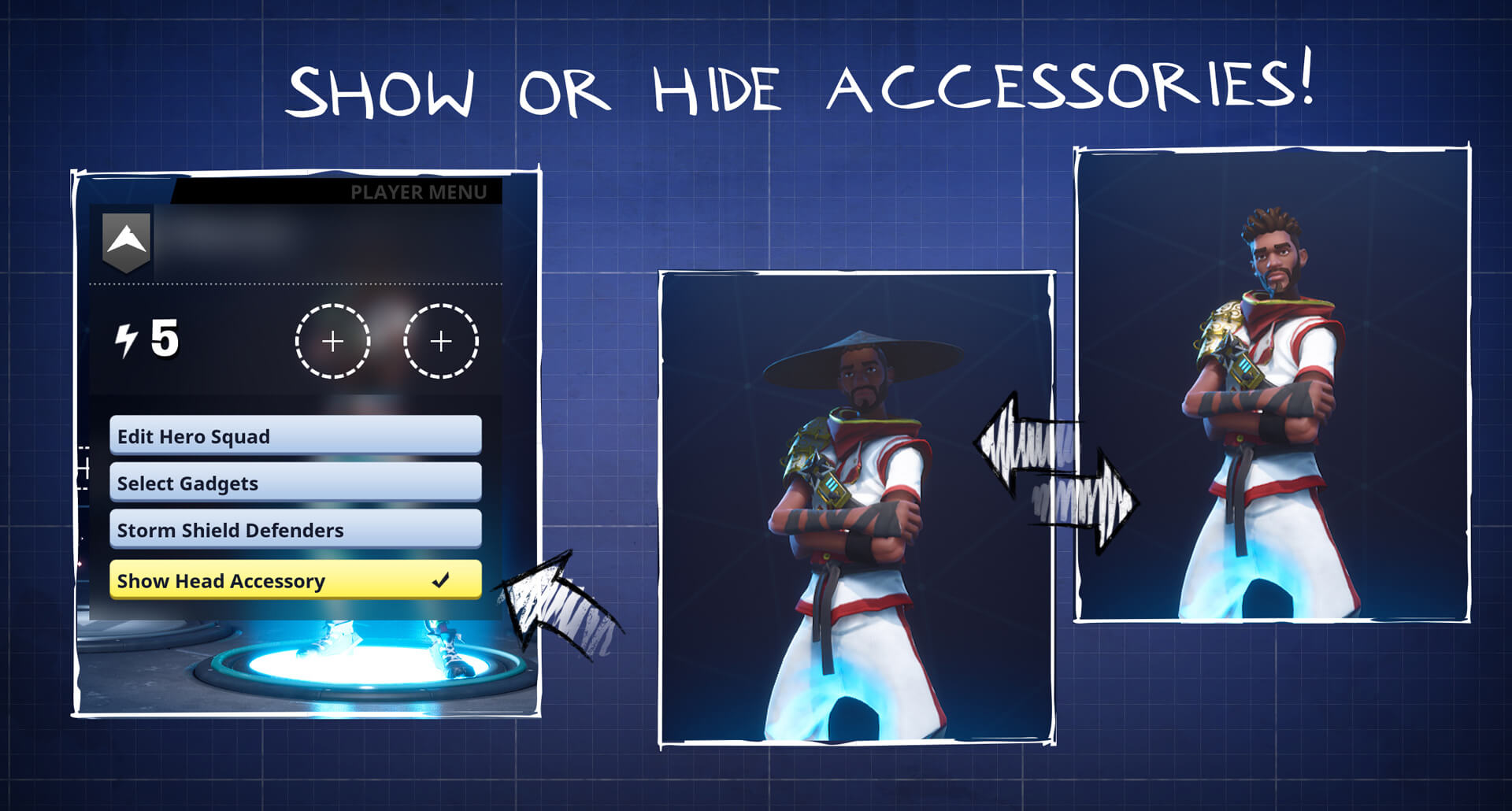 • Updated visuals in the Skill Tree to make it more obvious which node is currently selected. 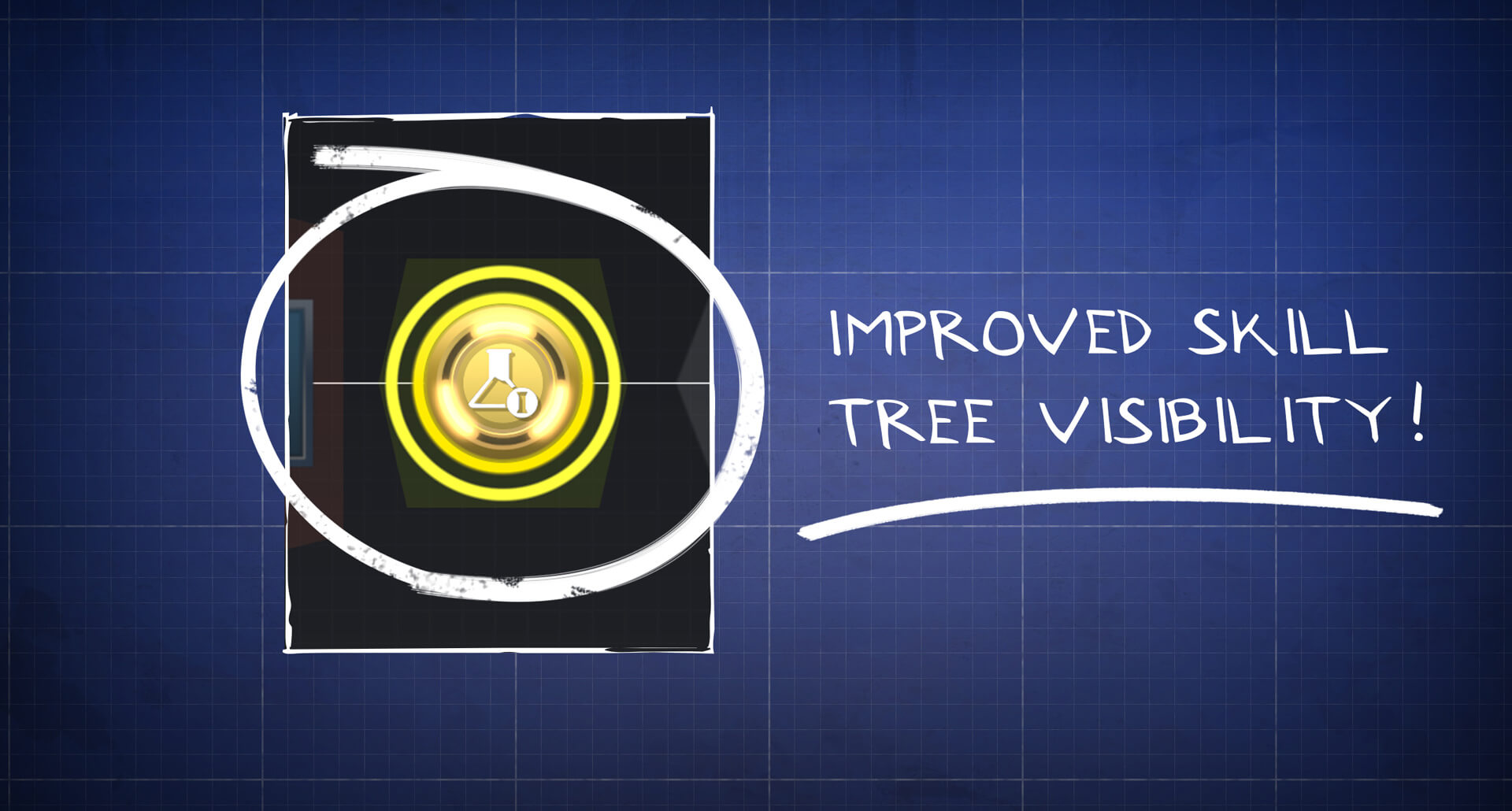 • Added an option in the main menu to set Storm Shield building permissions for party members. No more running to your Storm Shield in the middle of battle. 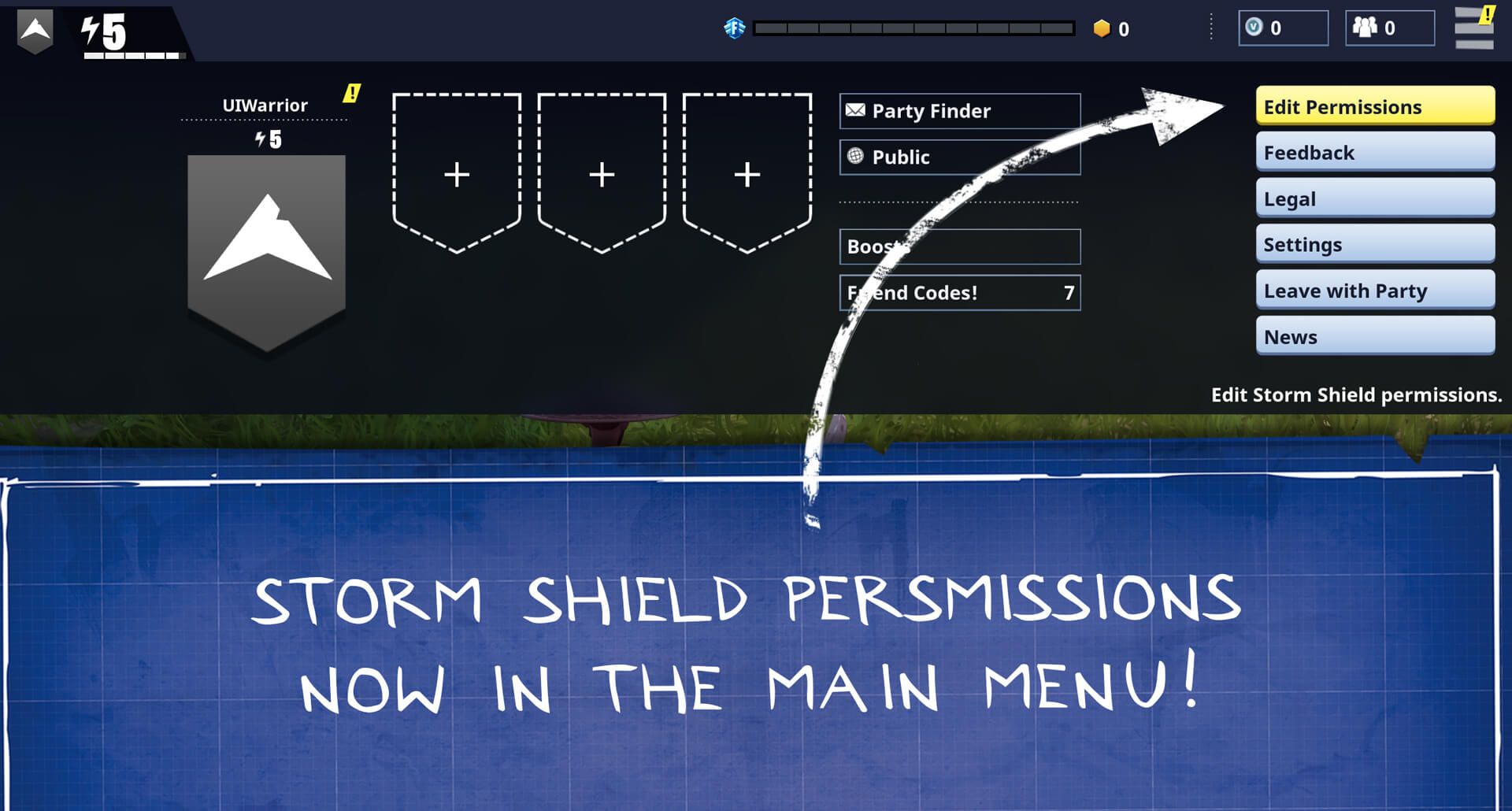 • Added a notification for players who load into another player’s Storm Shield mission if they attempt to do something they do not have permission to do.
• Ammo crafting page in the inventory now shows weapons the player currently has equipped. This permits seeing their ammo counts during crafting.
• Ninja and Outlander quests are now displayed in the campaign map.
• Tweaked Plankerton, Canny Valley and Twine Peaks Storm Shield maps for better game balance on higher difficulties


Also some art. audio, and gameplay updates and here's the list:

Fixed some mini-map icons on weapons that would look like boxes when dropped in the world.
• Fix a hang that would occur when dropping some weapons.
• Fixed a bug that caused the Homebase Banner Icons to appear stretched on the end of mission banners.
• Fixed collision with the rocks in the Canny Valley Storm Shield.
• Clouds will now dissipate after firing the Atlas in Fight the Storm missions.
• Fixed a bug where the teleporter FX will scale to an enormous size if placed on a slope.
• Music stinger now plays when Husks are woken up.
• Improved Husk sleeping sounds.
• Pitcher Husk wind-up and throw is more noticeable.
• Fixed a rare audio crash on Xbox One.
• Per policy discussion with Microsoft, removed ability for PC friends to join players on Xbox One
• Phase Shift will no longer kill an Outlander if used over a Teleporter gadget.
• Enemies now correctly detach from the Bull Rush shield when colliding with other surfaces.
• Enemies are now always visible above the clouds on the mini map
• Major performance improvements on the mini map
• Supply Drop no longer floats before landing on the ground
• Fixed a bug with the Constructor's animation not resetting after dying while using Bull Rush
• Can no longer use Supply Drop or Air Strike while in Bull Rush or Dragon Slash
• Item stacks that aren't at max limit will now auto-stack.
• Fixed a rare issue where players wouldn’t respawn.
• Fixed an issue where Defenders weren’t able to fire charging weapons.
• Fixed an issue with the Soldier’s death animation which failed to play during the Shockwave ability animation.
• Fixed an issue with damage numbers which would occasionally cause the number "0002" to appear.
• Fixed an issue where players that joined wouldn't see the correct BluGlo count.
• Improved Defender spawning and teleporting to prevent Defenders from not spawning on the Defender Pad.
• Fixed an issue where after moving a Defender, the player would lose the gun and ammo that the Defender had equipped.
• Fixed an issue with schematic crafting progress.
• Fixed several enemy collision issues.
• Fixed an issue where loot containers in Storm Shields would often appear as the default orange box mesh.
• Custom key bindings can now be properly cleared using “Reset To Default” in the Input tab of Settings
• Fixed players being unable to interact with pickups when they joined after the pickup was created
• Fixed an issue where Husks would be able to damage the player from a great distance away.
• Fixed an issue where Husks would move and float in the air.
• Fixed an issue where the first objective was not started before the player reached the lab, causing objectives to not be completed.
• Fixed an item stacking problem that could result in quest rewards going to Storm Shield Storage despite available inventory space.
• Fixed various crashes which could occur when starting a mission.
• Fixed an issue where players could cause damage and destroy Lars’ van during Ride the Lightning.
• Fixed an issue causing players to be unable to claim Expeditions.
• Fixed an issue where players wouldn’t receive the right tier of weapon from an Expedition.
• Fixed an issue where players became blocked during the first “Ride the Lighting” mission.
• Fixed an issue where rescuing survivors wasn’t giving quest progress.
• More descriptive information will now be displayed for skill tree nodes that modify player attributes.
• Weapons and traps now rotate on the inspect screen.
• Fixed an issue that would only allow the far-left loot card choice to be selected.
• Llama loot cards no longer show total amount of resources, to avoid confusion about how much the user got.
• Fixed an issue where a Defender's main and stats panel tab didn’t display information in the armory.
• The drop item window will no longer appear while trying to drop an item as the rewards flow begins.
• Heroes now display the appropriate info for their support perks at their current level
• The item management Level Up filter now limits the view to items the player has enough XP to upgrade.
• Fixed issues with text being cut off in the collection book.
• Fixed an issue that prevented claiming quest rewards that were completed during the tutorial.
• Fixed for client crash after signing out of Xbox Live during the Loot Llama Quest.
• Reduced distance of pickup HUD indicator text
• Hid the "Leave Party" button from party management menu when in zone. This prevents the player from leaving the party and the zone without going through the proper warnings.
• Fixed some text that wasn’t localized in error messages.
• Fixed some issues where players were prevented from completing the tutorial if they logged out of the game during the tutorial.
• Rapidly claiming expedition rewards should no longer cause an error.
Fixed party invitations occasionally not appearing when a friend re-invites you.Many localization fixes.Fixed an issue where the player would lose functionality in the collection book rewards screen.

Truly the biggest update I've seen for a game and if that wasn't enough the dev's released the following video to tell us what's next for the game:


The patch aka patch 1.4 is live now.
Posted 3 years ago by Mr Flawless