What is Refunct? This is probably a question many of you will have when reading the title of this Indie game brought to us by developer Dominique Grieshofer. But to put it simply maybe we shouldn't be asking what is Refunct but more what is the purpose of the game? Well let's dive straight into the review so we can summarize what this game is and what the intended sole purpose of the title appears to be.

Can you find all these collectibles?

From the outset Refrunct is a simple platformer where you have to try to hit all the targets to win the game, and that is in theory it. But wait, that cannot be all there is to this game surely? Well yes indeed that is correct, sure whilst you only have one primary objective of free running from target to target as quick as possible, you can also decide to refrunct the land in which you roam across. To do this all you have to do is make contact with each piece of ground that isn't out rightly connected to another piece. This is where a part of your one hundred percent comes from also within the game. The more of the ground you cover the higher the percentage you get. Smaller parts of the map give you less percentage when compared to that of larger lengths. Secondly to this there are collectibles boxes you can pick up from various points on the map. Whilst these do not add to the one hundred percentage of the game. If you want to truly master Refrunct you will need to collect these whilst also roaming all over the map, this is actually rather simple though and just by general exploring you should be able to locate everything.

Now i briefly mentioned that you can free run within the title too, and when I say free run I don't mean Mirror's Edge style, you have the ability to bounce off of walls and use lifts to your advantage and fly through the air letting gravity do the work if you so wish. Perfectionists will no doubt use these tools to aim for better completion times every time they load Refrunct up. The one thing I will point out though is that whilst playing the title I got the whole impression that the games vibe is to ultimately spread love and peace, as every time you touch land the scenery changes to color instead of a dull grey, and once you have refunct the whole land and the game comes to an end, you get an overview of the entire map which just so happens to be a heart wit the words thank you written below. This appears to be a nice change from all the hectic action games that are hitting consoles recently.

This is by no means a graphical masterpiece, but what the game does offer fits the bill nicely. The menu's are kept short and simplistic and from the second the levels load up you are thrown in literally at the deep end, as you rise up through the water on the platforms to begin your journey. In theory things in the game are a little blocky, not to the extent of Minecraft however. But without touching any of the platforms everything shows up in grey until you give life to them and provide them with color.

On the subject however of trying to find the lantern or beam of light if you prefer where you need to get to to spawn new blocks, sometimes I noticed the games draw rate would suffer and the red beam would be hard to spot until you got closer to the location you needed to be in. The further away something is the Silent Hill fog effect seems to take over and make it difficult to locate anything.

Refunct's musical score for me was probably my highlight of the entire time I played the game, the music being ambient yet peaceful really sets the mood. At no point does the music make you feel like you are in a Rush to complete the game as fast as possible. The game also comes with a few tracks which all seem to follow the same sort of formula.

However apart from this the game doesn't really feature any other sound to speak of, you get the ultimate chimes of water splashes if you happen to go into the water, or a noise when you ride up a lift. Basic sounds, apart from that though there is no dialogue to talk of. And maybe if that had been added to add some slight backstory for why we are restoring this land. Maybe the experience could of been better than it is currently.

Refunct is a title that you can play in your own time and explore in peace. You can literally take as much time as you need to work out how to get to all the hard to reach places but ultimately nothing is too challenging as usually the game offers multiple ways to get to an objective. 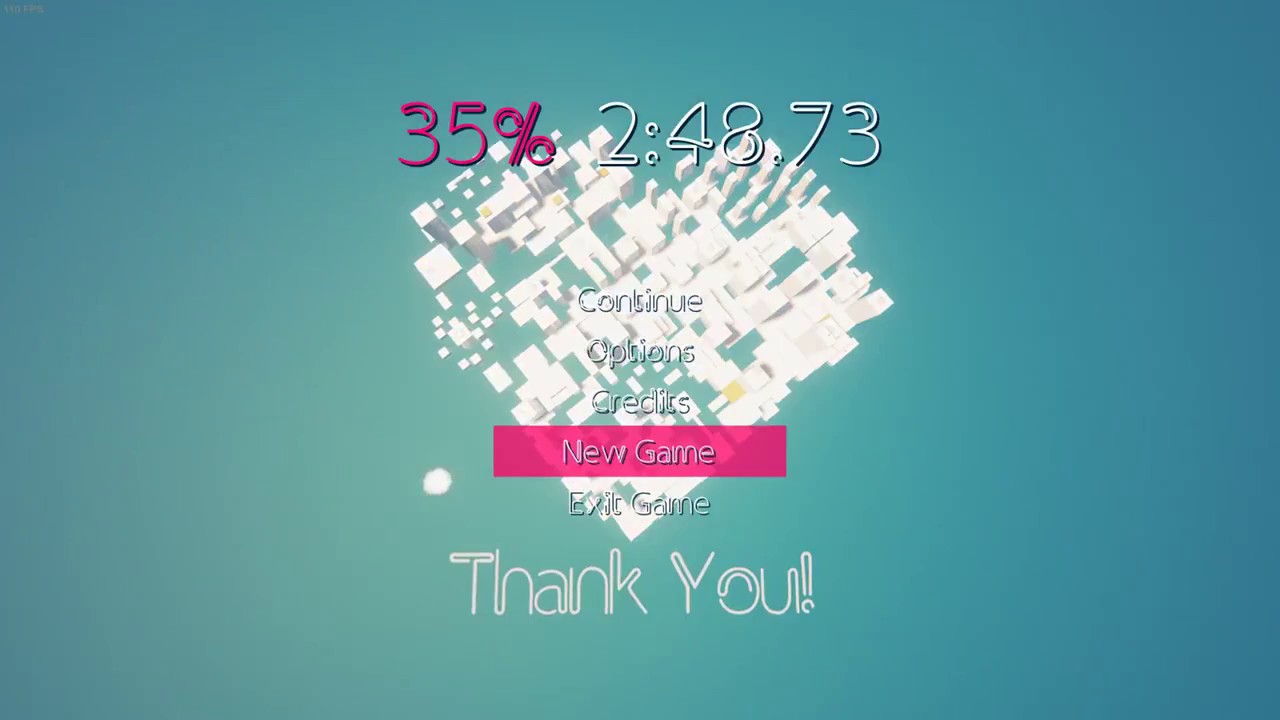 Achievement hunters will no doubt rejoice when it comes to Refuncts list, the list itself is comprised of only 10 achievements ranging from various achievements for collecting the collectibles, to beating the game multiple times under set conditions like only touching less than thirty three percent of the landscape.

Unfortunately the two that people may have some issues with are the speed run achievements for beating the game in less than eight and four minutes. Eight is easily manageable if you don't make too many mistakes, but four minutes will require you to perfect the lines you are going to take and learn where you can take shortcuts.
Posted 3 years ago by DJ TapouT