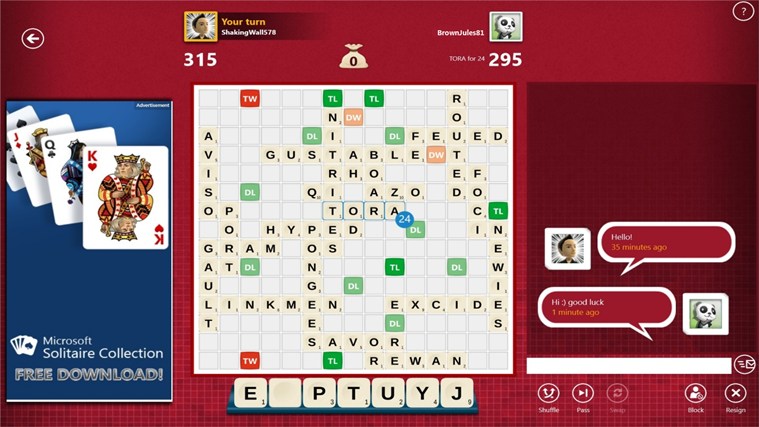 Alphajax, the free and popular scrabble-esque game that hit the Windows Phone platform, is making it's way to Windows 8 - also free! Currently though the only way to get the game is to change your Region settings in Windows 8 to 'Trinidad and Tobago' - however we have got a xboxresource.com/forum/viewtop...
AlphaJax is an award-winning, must-have free word game that allows you to compete against friends and strangers alike, all you need is a love of words and some interwebs. Take turns using your tiles to create words on the board, attempting to score the highest points. Play cross-platform with users on both Windows 8 and Windows Phone. Create games with players from around the world, or call out for a game to your friends. In a hurry? Pass and play with a friend or hone your skills by playing against yourself. Earn Xbox achievements and compete against friends for the top position in the leaderboard. Enjoy a skill match? The AlphaJax rating system provides lasting achievement as you progress up the leaderboards and means you are always guaranteed an enjoyable and challenging game.
The game has similar achievements to that of the Windows Phone version with the addition of a few others, if you've played the Windows Phone version and have unlocked some of the achievements there, you may notice some achievements pop straight away for you. The game shares progress from the Windows Phone version meaning you can play simultaneously on both - all your matches from your phone will be ported over to the Windows 8 version and vice versa. The game is expected to come to more regions soon.apps.microsoft.com/windows/en-...
Posted 7 years ago by x2i

We thank you in advance for your co-operation.
Comments
[head]http]
Microsoft appears to have done a complete U-Turn on it's Digital Rights Management (DRM) Policies regarding used games, online checks and region locking. It was quite apparent after the company's Press Conference that revealed the Xbox One to the masses as well as E3 that gamers weren't happy at some of the policies that Microsoft was bringing to the Xbox One. Mandatory 24-hour online checks, region-locking consoles/games and the biggest qualm - the prohibiting of used games/trade-ins.

Don Mattrick, Microsoft president of interactive entertainment, had this to say:

Since unveiling our plans for Xbox One, my team and I have heard directly from many of you, read your comments and listened to your feedback. I would like to take the opportunity today to thank you for your assistance in helping us to reshape the future of Xbox One.

With this came the announcement of the following:

No Mandatory 24-hour Online Checks
After a one-time system set-up with a new Xbox One, you can play any disc based game without ever connecting online again. There is no 24 hour connection requirement and you can take your Xbox One anywhere you want and play your games, just like on Xbox 360.

Trade-in, lend, resell, gift, and rent disc based games just like you do today
There will be no limitations to using and sharing games, it will work just as it does today on Xbox 360. In addition to buying a disc from a retailer, you can also download games from Xbox Live on day of release. If you choose to download your games, you will be able to play them offline just like you do today.

No region locking
Xbox One games will be playable on any Xbox One console - there will be no regional restrictions.


Whilst this is a majority win scenario for a lot of people, and it's quite clear from some of the reactions seen elsewhere on the web, the news comes at a cost to some of the other features that were bound for the new console, at least for now. The sharing of games will work as it does today, you will simply share the disc. Downloaded titles cannot be shared or resold. Also, similar to today, playing disc based games will require that the disc be in the tray.

There is also mention that the Xbox Family Gold Feature that was poised which let you share your Gold membership and Games with 10 other people in your Xbox Family is no longer going to be available at launch - whether this will come at a later date or not remains to be clarified.

What are your thoughts on this turn of events?
http