It has been years since the FPS genre has brought us a game with a scenario never seen before, but THQ has done just that by taking the battle in an American setting with their new title, Homefront. The year is 2027, and a unified Korea has taken over enormous chunks of U.S. soil. A group of Americans have taken upon themselves to push back the KPA by any means possible. Does Homefront deliver an all new experience in the FPS genre, or does it suck dry a formula built upon games like Call of Duty, Battlefield, and Medal of Honor? Read on to find out our thoughts on Homefront.

When THQ first announced Homefront, and when I first read about the game in the Official Xbox Magazine, I was instantly hit with the what if? scenario. The opening cinema in Homefront delivers chills that I have not experienced since Call of Duty 4: Modern Warfare. You instantly are brought through a timeline from 2011 to 2027 showing Korea's dominance over countries that once dominated the world. You are then brought into the shoes of the main character, thrown on a bus by Korean soldiers, and shown the brutal world that is an occupied America. 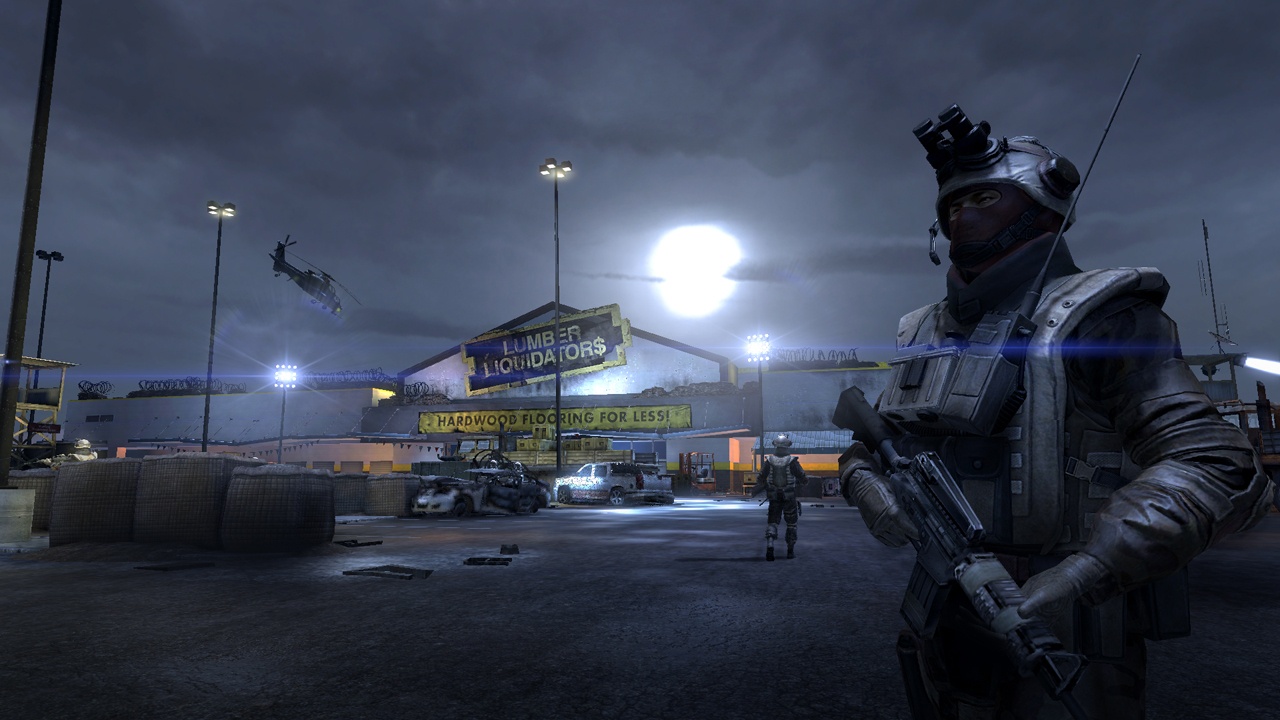 This presentation is carried through the whole game, and you never truly lose that feeling that you are fighting for your freedom. From brutal cinemas to heart-wrenching moments, Homefront delivers a story that you will instantly love. The transition from the Call of Duty overseas games to fighting in your backyard in Homefront truly feels fresh, and most importantly exciting.

The sad part behind the excellent presentation is the fact that you will not be experiencing it a long time. The game is shockingly short, taking you anywhere from 3 hours to 4 hours. You go from the suburbs in Colorado to fighting a huge battle on the Golden Gate Bridge in 3 hours, so you only capture the excellent presentation for a short time. Also disappointing are the graphics. Character models are not beautiful, but not ugly, and it is the same with the environment. I really expected a more polished, pretty, game, but it was not an issue that nagged me the whole time.

I am not usually a stickler on campaign lengths, as I would rather have an excellent 7 hour game, than a drug out 10 hour game that loses value. But, the 3-4 hour campaign in Homefront is a shame because you never develop an intimate relationship with the characters. Sure, you will understand the character's personalities based on their dialogue, but their backgrounds and goals are unseen due to such a fast paced single-player.

Nevertheless, the characters in Homefront are interesting. From an occasional joke to reactions to seeing brutal killings, each characters handles it differently. The voice-acting are right about at par, possibly a tad above average. Their sounds, along with the game's sound as a whole, are nothing to brag about, but nothing to point a finger at. At times both the single-player and multi-player sounds a little bland, which is a little upsetting to me, as intense game and character sounds could truly add to the effect of the setting and story.

Both multi-player and single-player play almost like a COD clone. You will have no trouble getting into the style of the game if you are a normal FPS fan like most are. Even though the controller layout is almost exactly the same as COD, do not think that the multi-player is. The multi-player in Homefront is very action packed, and has an extremely different pace than COD. Vehicles and Drones add intense gameplay, and the 32 player action means that you will never be away from the action.

Map layout is above average, but still has some issues. It is possible to get spawn trapped, though you never usually have that issue. The layout does give way to excellent vehicular combat, up-front combat, and long-range combat. Everything feels balanced, and though the two-weeks after launch left many multi-player issues, most have been cleaned up by THQ's 24/7 work to put out an update, with another one currently being looked at by Microsoft.

Overall, Homefront brings something new to a genre that had begun to dry out. An intense singe-player story mixed in with an action-packed multi-player brings a solid game that many have bashed for its inability to be Call of Duty. This is not Call of Duty in any way, nor is it Battlefield. Homefront is definitely worth the $60 if you are multi-player gamer, but if that is not your cup of tea, then Homefront is most likely a rent for you. Either way, Homefront is a game that any FPS fan should check out and invest time in.

We thank you in advance for your co-operation.
Comments
Really good review i got it on PC and Multiplayer is Excellent.
great review tate... as I've said on previous comments you manage to write (and sometimes shot) light, focused and quite entertaining reviews.

on the subject I came to conclusion that almost 80% of my games are shooters, the market is soo saturated that even classic doom feels fresh now.

This might make a good online diversion when price drops...
[imgsize=20, 20]http] Via http

Thanks guys! And to the anonymous writer. I respect everything you said, but I did notice that you will ultimately fail in the game if you play it like COD. I started running and gunning and was doing horrible, like 2 kills 10 deaths, but now I'm averaging like 12 kills 5 deaths a game. It's a learning process if you're a person who plays COD a lot. Battlefield players may fit more comfortably with Homefront.
The fact that this can be compared to COD doesn't make it a COD game nor good COD gamers automatically be good HF gamers.

I respect and somehow can see your point but again, is how good you do in a game directly tied to how much people like games ? (the Q is not aimed to anyone in particular)

Your post reminded me of few friends of mine who malk that statement true: fun is directly proportioned to stats in the game for some. They are pretty used to COD so the mostly/only play/enjoy COD. Give them something else no matter how cheap or good it is, the won't like cause they're too used to COD.

If someone asked me I'd say I was realy awful at red faction guerrilla multiplayer but found it fun from the very first minute (if not better IMO in fun factor that GoW).

About the scale of battles and direct impact on the player I can't tell since I have yet to play the game but as far as I can see you could feel to be saving the whole country just killing or not a single person (in alpha protocol i.e.) so cant yet understand why guerrilla warfare can't transmit gmers their country is in danger.

Well, those were just my opinion and few things that came to my mind. Glad to see people other than the usual suspects comenting arround :)