0
windows7themes.net/pics/medal-...
For months gamers have been hit with the simple thought of a game that could possibly dethrone the Call of Duty series, other than Halo. When Medal of Honor was announced and the first gameplay video came out, it was apparent that EA was serious on what this game could do. Does this game deliver the full experience that FPS fans will come to love? Read on and see what I had to say with Medal of Honor. 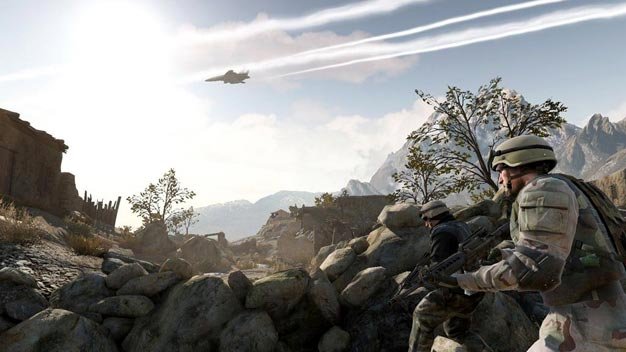 Gameplay: EA, along with the help of DICE (Developers behind the Battlefield series), went about Medal of Honor in a way that FPS fans could know, but yet feel new to at the same time. Control wise, this game will feel very similar to both Call of Duty and Battlefield: Bad Company 2. Where Medal of Honor's gameplay really shines is the variety of missions. The campaign offers missions that vary in close combat (popping around a corner and seeing an enemy right there), long-ranged combat (sniping the Taliban...YES, the Taliban, off building, and using harcore weapons like guided missles and air strikes.

Certain aspects of the gameplay can be taken from many FPS (not just Call of Duty and Battlefield) which will make fans feel right at home. Where EA went right was adding parts of two styles of gameplay. One part of the campaign brings you and another Tier 1 member driving ATV's, nothing amazing right? EA blended together things like driving in this mission with a stealthy aspect as you have to turn your lights off and kill the ATV's engine so you will not be seen.

Part of the gameplay, though, really take away from the whole experience (mainly in single-player). First off, the AI is done as simple as can get. Your targets will mainly go right behind and object and pop up every couple of seconds or so. Wash, rinse, and repeat for the whole story. If you are not FPS challenged (running out into the open on ground level, while thirty enemies are ontop of a two story building), then you will be able to breeze through most of the story. I started my game on Medium, and have only died once because of my inability to read the directions of the mission. Any normal FPS fan who has played games, such as Battefield and Call of Duty, should not have much trouble getting through the game.

Graphics/Sounds: For the most part, Medal of Honor is visually stunning. The details in the Afghan scenery can really be mind blowing, though you will not have a huge amount time to really look much into detail. Buildings, destruction, and AI really looked detailed in a world that you would expect to be broken.

With that being said, there are some issues with graphical detail in certain parts of the game. At one point during the campaign I was in a room while my AI buddies looked at a map. I decided I would pull out my sniper rifle and take a look at the scenery outside. Up close everything was stunning like I said, but at a long distance, the environment really looked last-gen. There have also been a couple frame-rate issues going on in the game, but at unusual times. For the huge outdoor battles, the frame-rate has been stellar, keeping up with all the action bullet by bullet. What is unusual was that a couple times during simple actions like walking down stairs, you could really see some frame-rate issues. While this didn't pop a lot, or make me enraged, it was easily noticed.

Noticeably throughout the campaign and multiplayer, the detail of sounds really stood out among some of the other issues. The voice acting in the game is just brilliant as it truly added to the suspense of some missions. What really stood out for me was during one mission where I was stuck behind a crate inside of a building storing airplanes. As enemies shot at me, bullets were flying off objects behind me such as barrels, tin walls, even wood! Every sound completely sounded different, which all-in-all added more, ahh shit..that was close, moments.

Presentation: The single player presentation, though simple, worked really well in many ways. Afghan, plus the Taliban, really are huge selling points for gamers out there. On many forums we hear gamers wanting realistic, and that is what Medal of Honor brings you. We see everyday news stories of bombings, threats, etc., and for once we truly get to play in that setting in a war that is really going on as we speak!

The story follows a direct route, which instantly makes it easier to understand than Call of Duty's character/setting jumps. Nothing about the story is really new to the FPS/war department, with the way certain plot aspects are obtained. One part of the story (very start of the single-player) you are searching for a man, and after fighting for so long, you basically get the, this is it, moment as you walk up to the door. What do you think is going to happen once you open the door? Spoiler...sorta Of course the guy is being held hostage, and you have to take down the enemy holding him hostage with a pistol.

The realistic depth of the game, and what is going on today, really make the presentation stand out. Though some aspects are not new, you can still follow a story that won't have you jumping around, that is full of action-packed moments.

Replay Value: Though multiplayer is what everyone wants these days (especially in FPS games), we still see a gigantic number of gamers wanting longer singe-player experiences. Well, it is unfortunate to say that Medal of Honor is not that long single-player experience. The game varies, based on difficulty, from 4 hours to 8 hours.

Most people, though, have been ultimately excited to see what Medal of Honor could do multiplayer wise compared to Modern Warefare 2 and Battlefield: Bad Company 2. It is safe to say that DICE created another stellar online experience that delivers in every way. The multiplayer can very well be one of the most balanced game out there, especially without the create-a-class option. Weapons seem very balanced along with side weapons, grenades, etc.. The ability to use kill-streaks in the form of attacking or team usage is just brilliant. Better players, you will see, use the attacking streak (full of badass reign down rockts and more), while more team oriented players will take advantage of giving different types of ammo to teammates.

The only downside to the multiplayer is the lack of maps. Most of the maps generally seem similar in set up, and offer most of the same combat in each map. Hopefully, DICE will go about releasing maps differently than what they did for Battlefield: Bad Company 2. For now, you will have a handful of maps, but all still fun.

For those that played the beta by pre-ordering the game, you can see first-hand the way DICE changed things. Unbalanced and glitchy was the main story of the beta, but now, balanced and exciting are the adjectives used to describe the online experience. Just goes to show what a public beta can do for the final product of a game...cough cough Modern Warfare 2. The game modes, though nothing pioneered in the FPS world, still is fun and new with gamers having to somewhat know their weapons instead of the spray-and-play type in other FPS.


Medal of Honor offers a great experience using today's reality of war. The game, honestly, does not expand the FPS genre to new heights, but does add another great game to its arsenal. The game does fall short in creating something new, and that could ultimately hurt the game once 11/9/10 hits (release of Black Ops). Many reviewers have been judging the game harshly based only on its comparison to Call of Duty. This game is its own game; it is not COD nor Battlefield, but its own mixture of the two. You can say the game failed in creating something that is the next step in FPS, but it is a fun and fresh game none-the-less that any shooter fan will love.